You are a badass, no matter what they say 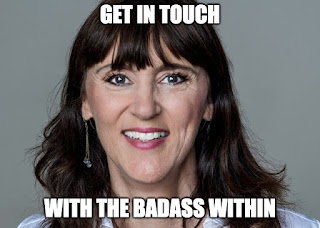 I must confess, that I aspire to be the "teacher version of Jen Sincero."

She has written a bad-ass series and burst onto the book scene with You Are a Badass (2013). I also must give it up to her team and the cool-ass title and marketing. It's one thing to write personal-growth books, but it's another to sell more than 5 million copies.

What I like most about You Are a Badass is how the information is presented. Because I was well-versed in the personal-growth genre by the time I read Badass, I didn't have many "a-ha" moments. However, Sincero's messages are true.

The big message I walk away with is that the first step in personal growth is to have sincerely positive thoughts. If it's true that our crazy American culture is full of negativity, constant consumption and marketing, then that is easier said than done. It also may be insincere to have overboard positive thoughts of unicorns and rainbows, so then maybe what works is seeing yourself as a badass. OK. Sounds good. 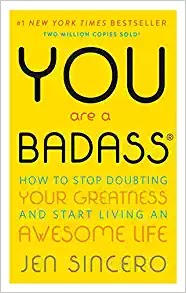 I do have two minor critiques of You Are a Badass. No. 1 is that the audience likely is more female, but is that really a critique? No. 2 is that for some negative, or self-sabotaging, thoughts mentioned in the book, well, I've never had them.

Perhaps I'm delusional or overly confident, but I've never doubted my greatness. So a lot of the book devoted to potential negativity wasn't that useful for me because I maybe was further along than other readers.

Over the past three years, You are a Badass at Making Money and You a Badass Every Day have been released. In an interview about the money book, Sincero mentioned how she applied personal-growth techniques to money, and I see that as a natural progression.

Email ThisBlogThis!Share to TwitterShare to FacebookShare to Pinterest
Labels: 100 nonfiction books I recommend, Joe Stevens writer, You Are a Badass by Jen Sincero