Nobody knows Sedaris better than me 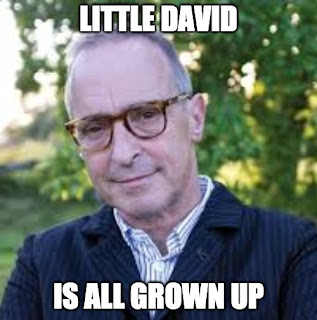 I must admit that the main difficulty of having David Sedaris on my list of 100 Nonfiction Books I Recommend was this: Which of his books gets the nod?

That was the lone difficulty, and Me Talk Pretty One Day (2000) edged out Dress Your Family in Corduroy and Denim (2004). However, I find practically anything by Sedaris worthwhile and funny as well.

I read most of the books in this project in the last five years, but, yowsers, I've been reading David Sedaris' stuff for 20 years. So I had to refresh myself with his stuff and Me Talk Pretty One Day with the consultation of the Interwebs dot com.

Ah, yes, Me Talk Pretty is the one that has two parts. The first part takes place in the U.S., while part "Deux" occurs after he moved to France. As with nearly all of his work, the book is a collection of humorous essays, presumably nonfiction. The title track "Me Talk Pretty One Day" is about a French class he took in Paris.

OK, er, I know I read this book, but we're talking nearly 20 years ago. I don't totally remember it. But, believe me, I recommend it. Egads, I feel like one of my students doing a "hello, my baby, hello by darling" song and dance when I didn't do the reading — even though we did it aloud in class.

So who's the new Michiko Kakutani now? You guessed it? This writer, Joe Stevens. 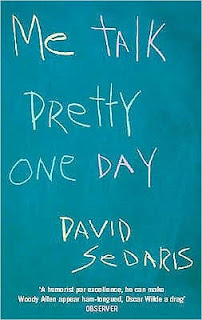 OK, but what I can recall without any Googling is "Let It Snow" because we dissected that short story a few times in my AP English Language class. Uh, but that story is in the Corduroy and Denim book. Let's not play the blame game, but this all my wife's fault.

I responded, "More or less. These are books that really affected me, and I just write the lasting impression I had."

"Wow. That's amazing," she said. "Your memory is incredible."

Cursed! She cursed me. I've transformed into the guy from the movie Memento.

Isn't it true, though, that David Sedaris is one of the best, if not the No. 1, humorists of our time? I bet my wife couldn't even name a humorist. ... OK, actually, she can. She just said, "Mark Twain."

But then when I said, "He's old school. How about a modern-day humorist?"

Email ThisBlogThis!Share to TwitterShare to FacebookShare to Pinterest
Labels: 100 nonfiction books I recommend, Dress Your Family in Corduroy and Denim by David Sedaris, Joe Stevens writer