Why is money such a taboo? 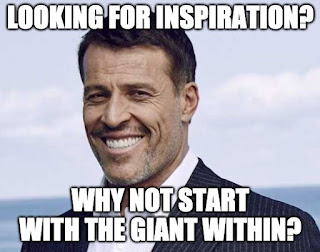 I avoided reading Tony Robbins for most of my life.

Too popular. Too cheesy. Not arty enough.

It turns out, though, that made a mistake and was missing out. The self-help guru has some inspirational books, and it just took a little humility for me to tap into his mindset and world.

Now, he has taken his self-help empire to the next level. His net worth is estimated at $500 million, and even though he has constantly been building his corporations, I find his points and messages genuine and helpful.

Of all of the Robbins' books out there, I recommend Money: Master the Game (2014) for multiple reasons. No. 1: I am not sure there is a bigger taboo in American culture than money. But a reasonable person might say that race or sex or religion or politics are bigger taboos.

Nah, I don't think so. In my world, talks about money were shrouded, and I believe that's how it is with most Americans. The statistics show that not only do most Americans not talk about money, but their debt and spending habits show that they have no idea what they're doing with their money. 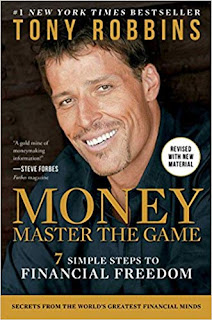 Perhaps I come from a blue-collar world, where our conversations always about the importance of work, not how to build wealth. So I got a lot out of Money. To me, I believe it's safe to say that our most important commodities in modern living are time and money (in that order). Unfortunately, many people don't even know their own behaviors or strategies toward them.

Some basic points underscored in Money are the power of compounding and how the financial industry has changed over the past 40 years. For the average person, the main investments we face now are real estate, retirement accounts and the stock market.

In his book, Robbins interviews the biggest players in the financial industry, and those interviews are fascinating and telling. I learned that the lay person can have a solid understanding of how the financial world works and so-called experts don't really know much more than the educated lay person.

At the bare minimum, Robbins got me to look at the fees associated to my retirement accounts and investments and helped me realize that "managed" accounts are kind of a joke. I moved my stuff to thoughtfully selected, low-fee index funds on Ameritrade, and those are performing way better than with my previous b.s. managed account.

But the bigger message aren't those details. Rather, it contains some basic mantras, such as "it's not what you make; it's what you keep." Another one is, obviously, to be debt-free as soon as possible, and to know the difference between money and wealth. Money is what buys stuff. Wealth is what occurs when our money is working for us.

There is no shame in becoming wealthy. I suggest we all figure out how to do it, and wealth is not guaranteed with merely having a high-paying job.