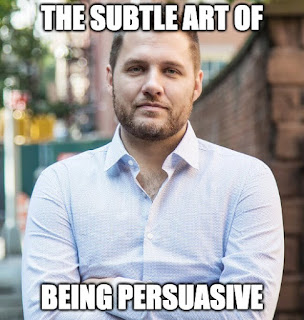 When everybody and their cousin liked Pearl Jam back in 1992, I didn't want to like the band. Too mainstream. Too popular. Not for me.

But darn it, I'll admit that I ended up liking "Even Flow" and "Elderly Woman Behind the Counter in a Small Town."

I feel similarly toward Mark Manson and The Subtle Art of Not Giving a F*ck. The book was too popular for me to like. Right? If so many people think something's cool, it's no longer cool. Right?

Well, well, I ended up gobbling up The Subtle Art of Not Giving a F*ck and felt that Manson brought an excellent, fun straight-talking tone to popular self-help topics. I loved the book.

Various personal-growth themes frequently come up for anybody who's dabbled in the genre. The strength of Manson's book is that it refuses to be overly optimistic or even cheery about the difficulty of self-change. 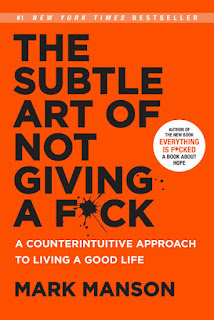 Another strength is that he focuses on the cognitive side of personal growth, and that's how I see it. Nearly all of our pressing problems are in our heads, and the inability to recognize that holds most of the masses back. I believe the best way to change our thoughts is to change our actions, then the thoughts will follow suit.

Manson eventually takes the book to another level when he shares a personal tragedy that occurred in his life, and by doing that, the book has much more weight than just a cool guy spouting advice in a cool way. Suffering is a part of life, and we all must learn how to deal with that. I also respond to one of his points about failing forward.

In a way, the title The Subtle Art of Not Giving a F*ck is misleading because Manson does care about his life and others — so much so, he is committed to a life on the subject. However, most people pick the wrong things to give a f*** about, and I walked away from the book with a better understanding of the importance of prioritizing and being more strong with being able to tell people "no."

Email ThisBlogThis!Share to TwitterShare to FacebookShare to Pinterest
Labels: 100 nonfiction books I recommend, Joe Stevens writer, The Subtle Art of Not Giving a F*ck by Mark Manson