Jump back, what's that sound? 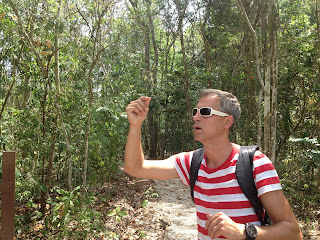 Heavy metal, obviously, goes hand in hand with Central America. As soon as I entered the jungles of Panama, these lyrics popped into mi cabeza: "You know where you are? You're in the jungle, baby."

And, of course, Van Halen has the song "Panama," in which David Lee Roth creepily says, "I reach down between my legs and ease the seat back."

The XMan often sang to that tune and screamed "Cannonball!" at the chorus.

Through extensive Internet research, I have discovered that Van Halen's "Panama" isn't even about the country, or the canal. It's apparently about a car. Lame!

Highlights abounded during the trip to Panama City and Bocas Del Toro. Because a man-made 50-mile canal cuts Panama in half, we had access to the middle of the jungle at a Smithsonian Institute research center on an island. Some of the fauna we ran across during or Panamanian adventure included monkeys, sloths, porcupines, lizards and even dolphins and a crocodile. No joke.

At Bocas Del Toro, we repeatedly took water taxis between islands, and I truly loved the snorkeling (It's like being at an aquarium, and you're in the aquarium!). Bocas is not completely developed yet, and that is part of its charm. A few bed and breakfasts are on the water, and we stayed in the nicest one, though it was still pretty low key. The town is so small that you walk from the airport to the main street and bed and breakfast.

I had a lot of deep thoughts about the world economy while in Panama. The Panama Canal's 100th anniversary will be next year, and there is a chance that it becomes a much more popular tourist destination. They somehow have gotten a Frank Gehry museum there that is nearly completed and set to open.

But some of my preconceived notions will remain. Whenever I hear that Van Halen song again, I will still think "Cannonball!"