Cleveland shares values — and a CHAMPIONSHIP! 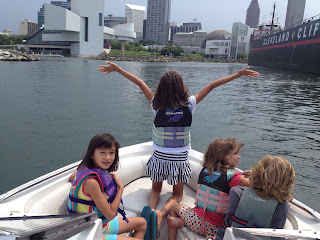 The RTA bus would pick me up on Turney Road, then go down Broadway though urban decline and eventually reach Public Square. I would get off, wait a bit and take another bus over the Detroit-Superior Bridge and be dropped off walking distance from St. Ignatius High School.

I didn't think much about it at the time, but going through downtown Cleveland to the near West Side for high school shaped a lot of who I am. I learned some street smarts, how to talk with people asking for spare change and how various types of workers go about their days.

Floods of memories and emotions continue to come my way as I bask in the Cleveland Cavaliers' NBA Championship.

I am not sure people outside of Cleveland understand our feelings. They may be baffled. A big reason for this is the unparalleled civic pride we have for our city. We Clevelanders have always been connected through our punishing winters, negative press from the outside world and a sense of community that continues to get stronger.

In all fairness, I have seen a lot of civic pride from New Yorkers and Chicagoans. It is legitimate, but it's not as close-knit as ours in Cleveland. Two major-league baseball teams in one city? Those cities are just huge.

Cleveland is smaller, but still a metropolis. We're all big fish there. If you're still in Cleveland, you've looked around the world and have realized that you'll take the lack of traffic, accessibility, low home prices and lifelong friendships over what you might find in other cities.

We have been brought up with Cleveland, and it is in our blood. We all have stories like this, and here's mine in a nutshell:

My grandparents were brought up in Slavic Village. My mom's parents lived there during their whole lives. My dad's parents soon moved to a bordering suburb — Garfield Heights.

My dad avoided the Vietnam draft by going to law school and supported himself and his young family by working at Kroger's. When he become an attorney, his law office was on Public Square for more than 30 years. 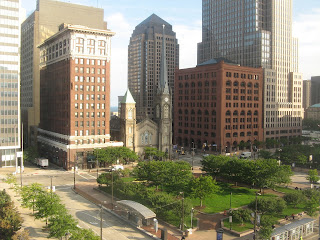 Two of my uncles were in advertising in Cleveland. My Uncle Bob climbed the ranks through another Cleveland landmark — Higbee's, which is now the Cleveland Jack Casino. As a youngster, I found myself downtown all of the time in the natural center of Northeast Ohio.

The city's economy bloomed when it was a steel and iron town, and because of that, the city always has had a blue-collar mentality and sensibility. Or as LeBron correctly put it when he returned to Cleveland, "In Northeast Ohio, nothing is given. Everything is earned. You work for what you have."

LeBron matured and grew and showed that Cleveland is worth returning to. He gets it.

Of course, the lead of what happened is that our championship-starved city stopped a ridiculously long drought without a title. So, of course, we are going bonkers because of that. 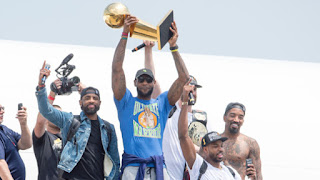 But we're also going bonkers because of our civic pride and how united we are as a city. I sense that outsiders look at Cleveland in one of three ways:

1) Bewilderment. They just don't get our excitement and never will.
2) Apathy. They don't care. They have lives where they don't truly have the passion and caring for anything, let alone their sports teams. These people will continue to sleepwalk through their lives.
3) Unspoken Envy. Yep. Outsiders probably won't admit it, but this championship strangely — and probably unjustly — validates our community. It validates Cleveland on a national scale. It validates our values. This is not a place that we leave and forget. This is us, and we are happy for that. Who would not want this?

I have lived outside of Cleveland for 21 years now — three years in New York City, and 18 in Los Angeles. A long time ago, I realized that Cleveland will always be my home.

With the exception of my daughters, fiancee and a couple stragglers here and there, I have not developed the depth of relationships that I did during my formative years in Cleveland. A team attitude, a common understanding, inherent trust —values that I used to take for granted aren't as readily available as they are in my hometown.

Our championship is bigger than basketball. It's also about our shared values. We get that. We are united. We are Cleveland. 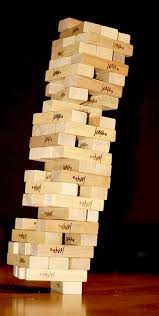 Our championship may come on Father's Day.

I could think of no more appropriate day for Cleveland to end its 52-year drought of a championship in any major sport.

I think of all of the time spent with my dad — glued to the TV, at the games and discussing our teams. I think of my Grandpa Stevens and his love of sports — perhaps only surpassed by my Grandma Stevens' love of the Tribe. We have put lifetimes into this.

As I ponder the many possibilities that may unfold tomorrow, I conclude this: It's a win-win situation.

If the Cavs win their third straight game against the mighty Golden State Warriors, they will have an NBA championship! If they lose, then another huge piece of Cleveland sports pain will be added to our sports mythology Jenga. At this point, some championships will have been so ridiculously close that there is value in that.

But at this point, the mythology of Cleveland sports pain is a tall, shaky Jenga tower that is bound to fall. Time can topple the tower. Our fans' devotion to these teams should help topple the tower. Heck, LeBron James may do it tomorrow!

Of course, we must put all of this in perspective. This is professional sports we're talking about. Does it matter in the big scheme of life?

My answer: Heck, yeah, it matters!

This does not solve world hunger, reverse global warming, end terrorism or give an education to Donald Trump on foreign policy. But pro sports does bring people together, create conversations and, in the case of the NBA, put on display the world's best athletes.

Cleveland's last championship came in 1964, before the Super Bowl existed, when my mom attended the game at age 15 with my Uncle Steve. She still has the ticket stub: 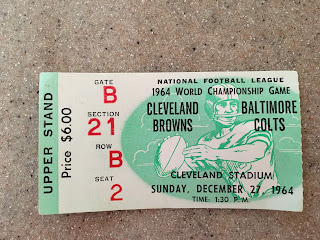 The Jenga tower of Cleveland sports pain is bound to topple. 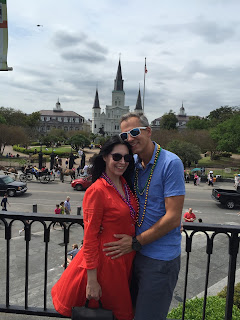 We all know the Cavs' playoff run will soon end in heartache. Of course, that is extremely pessimistic. But as Cleveland sports fans, we're conditioned to that type of thinking.

Could this be the time we crack through and have our first championship in my lifetime? Oh, Jesus, I hope so. But is it realistic to think it will happen? Not based on my sports experiences, but so what? I will be loving every minute of these NBA Finals.

Earlier this month, ESPN ran a documentary called "Believeland," which chronicled the sports pain of my beloved city. It was spot-on about the heartbreak that has created the painful sports culture and mythology of Cleveland.

Being an actual optimist in life, I must say that "Believeland" also brought back positive memories of Cleveland sports. It's just too darn bad that none of the incredible teams we've assembled have sealed the deal and won a championship.

See, many people not from Cleveland cannot fathom the love — love, love, love — we have for these teams. These teams are like an extra friend always there for us at family gatherings, after work, in the car on the radio, everywhere. The city of Cleveland is evolving and thriving in many ways, but for some stretches of time, all we had were our sports teams, a depressed economy and miserable weather.

I don't think any team, perhaps in any sport, can get closer to a championship than the 1997 Cleveland Indians. They lost in 11 innings in Game 7 of the World Series after leading with one out in the bottom of the ninth.

When manager Mike Hargrove was asked how long it took him to recover from that crushing defeat, he said, "I'll let you know when it happens."

A quote came out during "Believeland" about this and similar losses: "What did you expect? We are who we are. Star-crossed. Cursed. Ill-fated. We always end the year in tears."

Personally and literally, the Tribe's loss in 1997 in extra innings of Game 7 of the World Series was the only Cleveland sporting event that ended in tears for me. I was living in Brooklyn. I was 24. The loss was cruel. 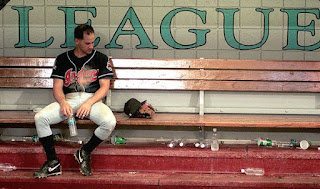 Of course, we can look at Red Right 88, The Drive, The Fumble, The Shot, Art Modell's immoral and ridiculous move of the Browns or LeBron's move to South Beach as other sources of pain.

Or we can look at the lengthy inadequacy of the Indians in the 1970s and '80s as pain, or the continued incompetence of the Browns for the past 20 years, but come on, how didn't one of our behemoth Tribe teams of the '90s not win it all?

Plus, to lose it to the freakin' Florida Marlins? In their fifth year of just being a team? Well, life sure ain't fair, and Cleveland sports is about as fair as Cleveland weather (It snowed on May 15 this year!).

But now, we turn our sights to the Cavs/Warriors rematch. This time, these current Cavs have one year of experience with this grand stage. It would be nice to finally exorcise the demons of 52 years and give the Cleveland the championship it deserves — yes, deserves! 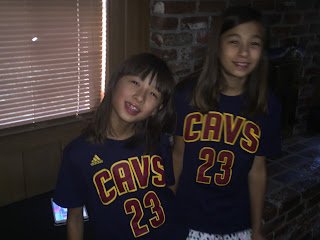 However, here we go again. The Warriors set the record for most wins in the regular season, and they got a guy who's most likely proven to be the best shooter to ever walk the planet. Add to that the fact that the Warriors recovered from a 3-1 deficit to oust the Oklahoma City Thunder in the Western Conference Finals. And, egads, it's obvious that the Cavs are not playing the freaking Marlins.

First, the awesome Cavs teams of the '80s run into Michael Jordan. Now, this?

I am opting to believe again. I'm joining my Northeast Ohio brethren believing this could be it. This could be the one. The script could finally change.

Posted by Joe Stevens at 6:44 AM No comments: