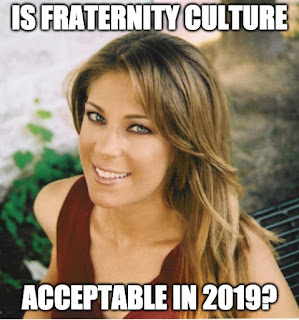 As a master of sweeping generalizations, I believe boys are struggling more than girls nowadays. I base that assessment on what I see at my high school and actual data.

At my high school, boys' emotional, social and academic skills lag behind the girls. Now, people tell me this has always been the case. But I argue that more than ever, American males are struggling because they are much more prone to video-game and opioid addition.

The telling statistic that boys also are lagging is that for the first time ever, the life expectancy for the American male went down this year. That statistic is attributed to drug-related deaths and suicide. Yowsers!

Enter Fraternity: An Inside Look at at Year of College Boys Becoming Men by Alexandra Robbins. The book came out earlier this year, and I was most fascinated with a much under-examined topic: masculinity.

Fraternities perpetuate displays of masculinity that young men do, even though many of them don't want to do it. They over-drink, talk about women like they're objects and show off to their "brothers."

One strength of Fraternity is Robbins' blend of narrative and research. She follows two fraternity brothers for a year, but then, she does some hard-core research on themes that come up. That's where masculinity comes in. 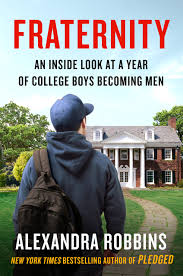 Why is drinking considered manly? Why are sexual conquests considered that? While I must say that there can be healthy aspects to fraternities, including close relationships, friendships and understanding, I believe much of their Greek-party stuff is out of date. For her part, Robbins created a balanced book, which also shows some positive parts of fraternity life.

For me, personally, I never was into the Greek life. I never pledged at my beloved Ohio State, but I did attend a few parties at frats and sororities. They tended to be ragers.

The movie Animal House came out in 1978, and then Revenge of the Nerds came out in 1984. Thirty-five years later, I believe it's safe to say that those movies are outdated and perpetuate unhealthy and/or shocking Greek life gone wrong. I still can't believe there is, in essence, a rape scene in the nerd movie and another scene in which they record sorority girls nude. That's completely unacceptable. Right?

I feel a sense of hope. Since Robbins is covering some underreported material, including masculinity and what causes a sense of belonging, I believe that boys, more now than ever, have the opportunity to grow into the best versions of themselves, not just what gets attention from others around them.