From Scout to genius to guy 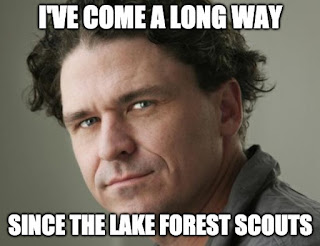 That was the senior year for movie star Vince Vaughn, writer Dave Eggers and NBA agent/current Lakers general manager Rob Pelinka. I know this because my cousin Melissa also was in that graduating class. Cousin Rob graduated a year earlier.

Lake Forest is arguably one of the "nicest" and "richest" suburbs of Chicago. When my extended family lived there in the '80s, Mr. T lived there. My cousins and I once saw him driving a white Mercedes, and we followed him for a few blocks. Looking back, oopsy, that was probably some sort of harassment. Sorry, T.

I never thought much about Lake Forest High School until 1998, when I moved to L.A. My aunt actually had, and gave me, the address and digits of Vince Vaughn, who was taking off then. I never had the courage to call. "Uh, my aunt gave me your phone number. Want to meet up at the Dresden?"

Then, in 2000, A Heartbreaking Work of Staggering Genius came out, and it was mega-popular, especially for Gen Xers like me. It was so big that I was thinking that Dave Eggers could be in the rare category of literary icon.

The actual story of Eggers' life is indeed heartbreaking. In 1991-92, his parents died within a year of each other from different forms of cancer. He was 21 at the time, and his younger brother Toph was 8. He moved out to the Bay Area and cared for his brother.

The book is rife with humor and what he went through, and since I haven't read it for close to 20 years, I'd be curious to see how it holds up all these years later. At the time, I loved the book because my age is similar to his, and I dug Eggers' style and aesthetic. He had an indie-rock type of style in a time when some of us Gen Xers were clinging to that.

Actually, maybe it's time revisit this type of stuff. I'm revisiting Smashing Pumpkins, of all bands, tonight. I haven't seen them since 1994 at a Lollapalooza, and at the time, I realized I had enough of the Lollapaloozas, and it was time for at least a 25-year break. Man, that band fell off the side of the earth.

Eggers didn't exactly do that. He went on to found the popular literary magazine McSweeney's and has been a part of various initiatives to promote literacy and teaching. I've read most of his other books. But if we're talking Dave Eggers, I definitely give his "genius" book the most kudos. OK, fine, I'll check it out again soon.