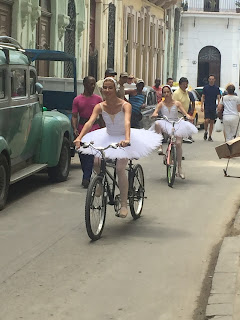 "To live outside the law, you must be honest."


Bob Dylan sang that line in his 1966 tune “Absolutely Sweet Marie.” For me, that quote never rang more true than when I spent a week in Cuba and Nicaragua this month.

Cuba is a land of contradictions, two currencies, pain, pleasure, surrealism, honesty and outlaws. It’s pretty damn poor with cars still from the 1950s that run on diesel fuel, and the country's had hardly any trade for half a century. It was the perfect place for an adventure for seven guys — seven educators.

Now, here’s the thing about a trip with seven guys. That’s a lot of guys. It could be like “Bachelor Party,” but in reality, we are all in our 40s. So, we kept the parties under control, vaguely attended two dance clubs one night and had a group total of five drinks total at both. I confirmed with a few others, “Uh, yeah, we're not really into dance clubs, at this point. Cuba or no Cuba.”

Trouble abounded immediately! For unforeseen reasons, the Nicaraguan trip became just two people — me and my friend, Kaytan. It turns out that the uncle of my Nicaraguan friend got us from the Managua airport and packed a week’s of exploration into a day. We saw Granada, the lake of 366 islets, a volcano that was gurgling and met Jimmy Three Fingers. He’s an expat who lost one of his fingers from the mob.

Nicaragua was beautiful, and Uncle Ray, who is the head of the Peace Corps in Nicaragua, was truly a great guy who showed Kaytan and I so much. Props to Uncle Ray and the Reverend Guiterrez (my spiritual advisor) for hooking us up big time. Thank you!

After an extremely long, long day, that was really like three or four days packed into one, it was onto Cuba. Kaytan and I arrived in Havana, where we rendezvoused with two more of our team, including the Reverend, in the airport. Three others were already stationed in Cuba, having traveled through Cancun.

After that extremely long Nicaraguan adventure, it felt excellent to get the seven hombres together. Immediately, we were greeted by a cousin of the Reverend’s who had a cab waiting for us. I quickly learned we all had new names. “The Mexican.” “The Filipino.” “The Nicaraguan.” “The Indian.” I was dubbed “The American,” but I quickly corrected that. I am “The White American.” 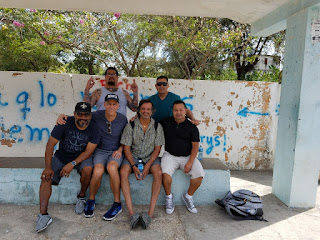 I took a bigger step with the Spanish language in that week than I ever had, even though we had fluent Spanish speakers in our group. The reality was that, almost always, English was not a remote possibility. I was forced to speak Spanish, and I actually did (in my limited way).

After a minor day of recovery and eating in a local restaurant that we loved, we invented a poker game dubbed "Mofongo," after a Puerto Rican dish I hoped to run across in Cuba. It turned out we loved the game Mofongo and played it every night as we unwound from our various journeys.

The next day, we took a local's bus to the center of Havana. Extremely crowded, but interesting. That turned out to be the only bus we took, and a key member of our travel group looked like this: 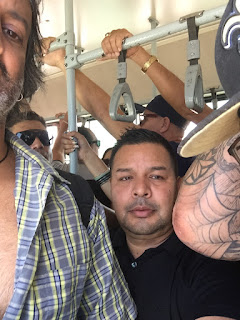 With the '50s cars everywhere, Havana seemed a bit surreal. Moments after we exited the bus, we saw ballerinas riding bicycles who were being filmed.

We found a cafe with Cuban music, had some cigars and spent most of that day exploring the streets of Havana. One random highlight was going into an art gallery, where some of our group members played the guitar, keyboard and bongos and jammed with people in the gallery.

The next day, our group moved from seven to four, as three had other travel plans. We quickly witnessed the "Power of Four." It was so easy to get on the same page with just four, and we could all fit in one cab. After mucking it up in Havana the previous day, we opted to go to the beach in Varadero and hired a driver for the day. This was probably the day that felt the best. It was fun, chill and much-needed.

The next day, we went out to Vinales, where I should not have tried sugar cane. It was so crazily sugary that it basically made me bounce off the walls for a few hours, only to come crashing down and insult various friends. Vinales definitely was highlighted by hanging out in the cigar-leaf hut of Don Alfredo, a 69-year-old guy who has been smoking cigars since 13 and gave us an insider's tour of how Cuban cigars are made. 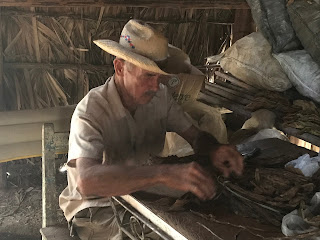 On our final day, our group downsized to three and through superb airport diplomacy, convinced Avianca Airlines to not have us travel through Nicaragua to get back to the States. Instead, we skipped that leg of the journey, and the airline put us up in Melia Cohiba, the nicest hotel in Havana.

Man, this was an adventure. I do take for granted the booming economy of the United States. I often hear people complain about taxes, but they don't have to give 90 percent of their wages to the government like in Cuba. But if someone does not believe he is oppressed, is he oppressed?

The lack of police presence anywhere also was interesting to me. No matter how I might judge Cuba's past or government, the individuals I ran across were honest and trustworthy, and that's how things must be there. It felt great to get off the grid and live a different life for a week — and to walk away knowing that to live outside the law, you must be honest.