Examining the back story 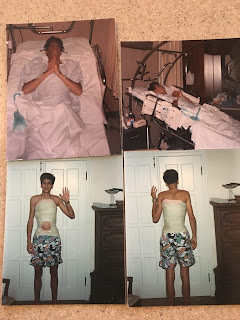 For whatever reason, I don't often talk about that episode. I had reconstructive back surgery, was in the Cleveland Clinic for 21 days and was wheeled away with a cast and rods in my back.

The truth is that at the time I did not think the surgery had any deep meaning. I needed surgery. I got it. I could not play sports for a full year after it.

But, upon further review, this event is out of the ordinary for the average teenager. Maybe there is a cliche in there somewhere. Maybe I learned how to overcome obstacles. Maybe I showed persistence or something like that.

Today is New Year's Day, and I think I am writing about my back surgery because there is a fresh start feel in the air. Many things are colliding today because of me exploring this topic and me realizing that there is no cliche, or conveniently wrapped, ending to my back surgery story. I also realize that many people withhold telling important stories, turning points, for fear of judgement.

So why has it taken me 32 years to write about my back surgery? The main reason why is that I am not defined by it and did not want to be defined about it.

As a former journalist, I know that my colleagues and I would often do stories of firsts:

"You are the first African-American to be an astronaut. What is that like?"

"You are the first woman to be nominated for best director. What is that like?"

In my pop-culture loving American world, the thoughts behind many so-called "stories" are myopic, stereotypical and completely not real. As it relates to me, well, I never wanted to be the "kid in the body cast" or "the kid with the bad back."

No, no, there was way more to me than that, so because those sentiments were common, I pushed the conversation away from that. And, yeah, I did that when I was 13 years old. 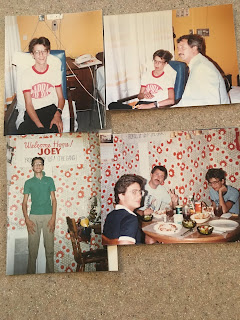 About my back, the surgery in June 1987 was my second back surgery, after one in May '86. As a seventh grader in '86, I felt some pain in my lower back toward the end of basketball season in February. As the months progressed, the pain became unbearable, and I eventually could no longer run.

With a trip to the Cleveland Clinic, I did various tests, including an MRI, and was diagnosed with an arachnoid cyst in my back the "size of a sausage." By the time that diagnosis occurred, I was eager to have surgery. I was in major pain, and this had to stop.

The pictures above, without the body cast, are from the '86 surgery. Recovery from that was not easy but bearable. I was not ready to play football that started in August, but I was go to go with basketball, which started in October.

I felt fine and was on an eighth grade CYO basketball team that was in the Final Four for the city of Cleveland, thank you very much. Around this time, I did some follow-ups at the Cleveland Clinic, and it was determined that if I did not have reconstructive back surgery, then I would develop a permanent curvature in my spine.

The second surgery was no joke. Afterward, I wore the body cast for six months, then had a brace for three more months. With the cast, it meant sponge baths for six months, and at a certain point, I yearned to have the darn thing off.

Then, the brace was kind of a bummer because it was more obvious that I was wearing it. The cast was smooth and actually less noticeable.

When people ask me how the back surgeries affected me, I sometimes say that it got me to read for the first time. That is partially true because I was laid up for so long that reading was part of my routine. Maybe that put me on the path to be a writer.

I could say things like, "Y'know, what doesn't kill us makes us stronger," or "It taught me how to deal with adversity at a young age."

However, looking back, I'm not so sure I had those thoughts. Looking back, it was really about identity and my fear of being labeled or judged or misunderstood. If I have to make some sort of big statement, it is another reminder of how fragile life is and how good health is a gift and deserving of genuine gratitude. 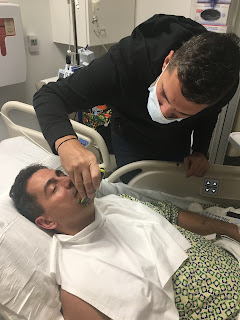 This topic brings us to my brother Fred, who was gliding along healthy as an ox until about a week before Christmas. He got a nasty case of the flu, so much so that it landed him with a hospital trip. Then, after taking Tamiflu, he was practically paralyzed.

Fred went back to the emergency room and was quickly diagnosed with Guillain-Barre Syndrome. He then was admitted to the hospital for five days, and over Christmas, to receive treatment. He has the most positive attitude I've run across in a while and is doing so well that he's thinking he won't even have to do outpatient physical therapy. In the hospital, he could not use his hands nor walk.

Through Fred's episode and my own back story in the '80s, my mom was at her boys' side in the hospital every day, so she deserves a shoutout. But, yeah, health remains such an important part of living that I say it's a foolish when we partake in unhealthy activities.

So Happy New Year! Maybe this is the year to make a commitment to exercise, healthier diets, no more junk food and drinking. Life indeed is fragile.