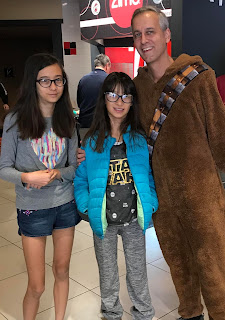 "You can easily judge a man by his Chewbacca collection," said no one ever.

However, I must say I often feel judged when people realize I have a glorious Chewbacca collection that consists of:

That makes 75 Chewies in the collection on display. That's a lot of Chewies.

But I must report that I put away several pieces for space and style purposes. I put away eight plush Chewies (small to large), a large plush Angry Bird Chewie, slippers, iPad case, iPhone case, two golf head covers, plush notebook, Frisbee, two pieces of art and wall clock. Oh, and Paul and Brenda gave Dina and me a Chewie candy dish. That's in use — in our kitchen.

In addition, there was a repeat of one of the large Chewies, and a piece of art broke when I moved. So, there really are 20 additional pieces in the permanent collection that are not on display, and so the count of Chewbaccas is at 95, up from 41 in 2011 and 16 in 2010.

"Wow, you must really like Chewbacca." That's a line I hear frequently, and while I do like Chewie, I'm not exactly obsessed with the Wookiee, or so I say. For me, it's my snakeskin jacket. It represents a symbol of my individuality and my belief in personal freedom.

Posted by Joe Stevens at 6:46 AM No comments: