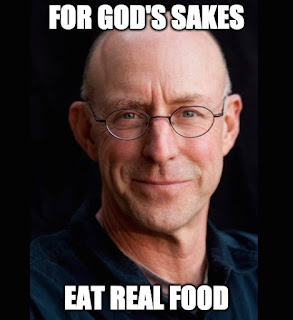 As simple and fundamental as it sounds, the best advice I could give anyone on how to have a better life is this: Eat real food.

I am fascinated by our country, economics, the food industry and marketing. I remember, back in the day, where the alleged normal reaction from children would be: "Ew, vegetables, yuk. I don't want my vegetables!"

Ha! What wild marketing! ... Well, a lot of the veggies we'd get would be canned grossness, so I can kind of see that reaction. The food industry has been similar to the cigarette industry for decades, and when I realized this, my life and health became exponentially better.

Michael Pollan's enormously popular and significant book Omnivore's Dilemma (2006) could be the No. 1 book I recommend of 100 Nonfiction Books I Recommend. I deliberately put it in the personal-growth category because to me, the first step in self-improvement is to be physically healthy. Sadly, many Americans just can't get there because they have diets that include Dr. Pepper, Taco Bell, Lean Cuisine meals and bull crap.

I must say that my upgrading of food has been a work in progress, but it is so much better than 10 years ago. Cutting down on processed food was the first step, and when I shop, staying as much as possible on the outer ring of the grocery store where the food is real is crucial. Fresh vegetables and fruit, less meat, less empty carbs — that's been the key to my improved diet. 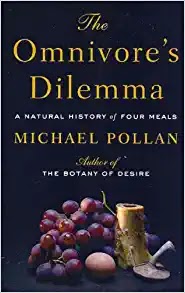 Beware of marketing! That's why The Omnivore's Dilemma is such a seminal work. It cuts through the b.s., does not obfuscate and speaks to me. So-called "healthy" processed foods have become a ginormous industry, and quite frankly, they are not healthy. They have major amounts of sodium and sugars, and while they might be perceived as convenient, it is far healthier to eat unprocessed food.

Pollan makes an appearance 2014 documentary Fed Up, and I recommend that movie, too. For many Americans, they rely on fast food, processed food, packaged food and pre-made stuff. That food has contributed to a skyrocketing of obesity and unhealthy bodies.

When we look at the dysfunctional health care issues and many of societal ills, it is more than feasible that a lot of the problems stem from diet. I will never be able to justify the abundance of Cheetos, pizza, French fries and sugary drinks on school campuses. The best word to describe the Frankenfood I see at schools is mortifying.

One shred of hope is that each generation appears to improve its diet. But here's the catch. It's for those who are educated in the subject. I'm hopeful that more and more people become educated about diet, understand that the four basic food groups was a marketing scheme and at least read The Omnivore's Dilemma.