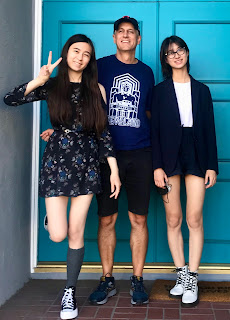 Ferris Bueller famously said, "Life moves pretty fast. If you don't stop and look around once in a while, you could miss it."
Amen, Ferris.
With Chloe turning 15 tomorrow and action pelting me the past five weeks, my personal life has been moving pretty dang fast. I want to make sure I don't miss it.
My whirlwind started Memorial Day Weekend when Dina and I and our closest couples friends went to Mexico City. As an erudite gentleman with a working man's sensibility, the timing was novel for me because as a teacher, I had never gone outside the country while school's been in session.
OK, so, Mexico borders the U.S. It's not wildly far, but I didn't wait until the summer. I was like, "Let's do this now. Let's finish this school year adventurously!"
The sentiment and some of what we did fit, but Montezuma's Revenge hit me the day before we left. Rookie mistake: Never eat a 30-piece shrimp cocktail at a hole-in-the-wall in Mexico City. Where is this shrimp coming from? What water do they use to clean it? Oh geez. Dios mio!
I took an extra off day from work as Montezuma revenged me and then wobbled to the end of the school year. And that's not my modus operandi! I pride myself in living each day awake and in the moment, and I tried my best the final few weeks of school. But, honestly, I had some sort of Mexican bug that made me eat a diet like a 5-year-old. 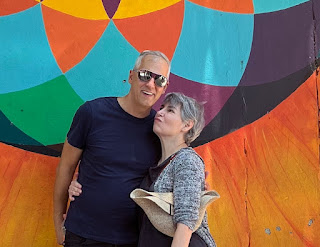 Simultaneously, Sophie and Chloe were killing it. Sophie took three AP tests, and Chloe did AP Human Geography as a freshman. And she won her school's Medal of Merit for the top student in Human Geo. You go girl!
Better than that, the girls' club, Millikan's K-Pop Dance Club, totally impressed me. They created the club, did a fundraiser, helped coordinate an event and then performed at it. And this came a week after Sophie and her designer friend won "Best Rising Star" at Millikan's 7th Annual Spring Fashion Show.
Then, in case that weren't enough feathers in her hat, Sophie got a job at Ding Tea Cypress as a barista, and Dina, the girls and I saw my Cleveland baseball team win at Dodgers Stadium on Father's Day. Then, Dina had her birthday on Monday. Just saw another game in Cleveland yesterday.
Yeah, man, life does move pretty fast. If you don't stop around once a while, you could miss it.
Unlike most of my blog posts, I'm not sure if I have anything that deep to say. Unlike two months ago, I'm not as shocked by the girls' lives taking so many steps forward. I'm happy to see them pursuing their interests and taking school seriously. Sophie's moving onto senior year and Chloe to sophomore year.
Life is moving pretty fast. I better not miss it.
Posted by Joe Stevens at 7:03 AM No comments: