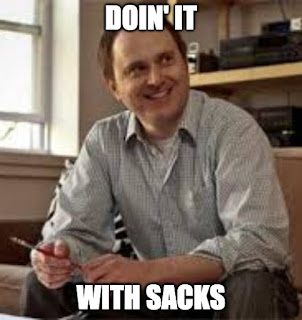 For anyone pondering a career in comedy, go directly to Poking a Dead Frog: Conversations with Today's Top Comedy Writers by Mike Sacks. The 2014 book has countless interviews with a who's who of the comedy world, and it is telling of how this world works and dispels many myths.

Hell, it's funny as the line "I'd rather have cat AIDS, fank you." Sacks himself interviews with an excellent blend of asking tell-all questions and humorous ones. He knows when to probe for more telling info and when to engage in some funny-ass stuff.

Sacks is an all-around cool dude. When I read a book I like, I often add the author on Twitter. I did that with him. He thanked me for the follow, and we had a brief exchange. He didn't "big time" me, like Russell Brand. (I actually don't follow Russell Brand on Twitter, but I'm sure he "big timed" me anyway.).

I knew off the bat that I probably was going to enjoy interviews with certain writers, including George Saunders, Jim Downey, Adam McKay and Megan Amram. No doubt, I did. But I approached the book from more of a "How does this world work?" angle as opposed to a "Entertain me, funny people!" point of view. 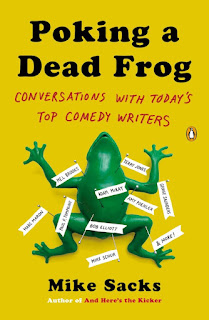 The reoccurring theme I found was how being a top comedy writer is not about being inherently funny, although that is certainly a prerequisite. But so many people are funny, yet they don't understand what being a comedy writer entails. It's more about developing the craft and, most important, sticking with the profession in the face of constant difficulties, trouble and bloggers insisting there is humor in cat AIDS. (OK, for anyone offended by cat AIDS, here's a link to FIV, and I get it. If my cat died because of this disease, it wouldn't a punchline. Then, it would have to be dog AIDS.)

This was a sequel to Sack's 2009 And Here's the Kicker: Conversations with 21 Humor Writers About Their Craft. Both are worth a read, but Dead Frog is more updated. And the comedy world is evolving more than ever with the advent of YouTube, Twitter and cat websites. I'm slightly concerned that the comedy writing world is evolving so quickly that Gen Xer's like myself are becoming outdated.

No doubt, generations have a different concept of "funny," on some level. The references are difficult on both sides. I made a quip with a reference to Chaka Khan the other day, and my daughters looked confused. They often laugh at something or other; I have no idea what is wrong with them.

Go read the Mike Sacks books. He's a writer's writer, like I believe Norm MacDonald is a comedian's comedian. I like to think of myself as a Polack's Polack.