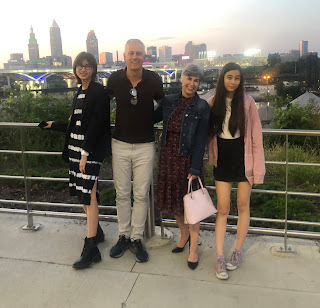 Pumpkin spice and orange boxes punctuate the shelves at Trader Joe's, and, yeah, that's right. We're in the midst of autumn. Sure, I'll buy the season. Give me a couple pumpkins, a pie and some pumpkin bagels.

The autumn season feels better than ever this year. Maybe that's because Southern California switched from sweltering afternoons to ideal ones, just with less evening light. It's that time of year where my house needs neither heating nor cooling.

With these idyllic temperatures and Thanksgiving on the horizon, I'm officially treating November as "Gratitude Month." No trick.

I'm working on being thankful for what I have and not getting hung up on what I don't. My gosh, my family truly is awesome. Dina is my soulmate. We're two peas in the pod, and I love and appreciate her so much. Sophie and Chloe are two happy, with-it teens, and I wholeheartedly love and appreciate them.

I believe gratitude is counterculture to mainstream American pop culture. Buy this. Buy that. I'm never good enough until I get that car or shirt or Michael Jackson jacket. Hey man, we didn't start the fire. It was always burning since the world's been turning.

Gratitude is probably a state of mind more than anything — and it's not always easy. The economic system we live in, capitalism, is competitive, difficult and cruel. Plus, we're living in some sort of post-truth, billionaire scare-a-thon where I'm forced to read Elon Musk and Donald Trump's names in the news every single day. We can't avoid those two, apparently.

I see violence and crime and homelessness and inequity all around me, and of course I want our societal ills to disappear or at least lessen. But in my actual day-to-day life, I count my lucky stars that I'm a middle-class high school teacher with upper-class sensibilities and a world-class education. By the way, a world-class education is the gift that keeps on giving. It means that each day is a learning experience, and I don't know any better way to live.

I stumbled across a quote from fashion icon Karl Lagerfeld the other day that I keep thinking about. He said, "I'm open to everything. When you start to criticize the times you live in, your time is over."

Yeah, the kids are on their phones too much. Sure, they forgot — or never knew — the fun and importance of hands-on play. But y'know what? I'm done criticizing. Criticizing is just negativity wrapped in a know-it-all bow.
I'm accepting how things are and doing my best to drop the negativity, but that's easier said than done. I know that we humans are wired for survival and negativity is part of our reptilian brains. I know that I came from a negative world. I mean, I was raised Catholic, for the love of God.
Negativity, being goth, emo, alternative was a huge part of our identities as Gen Xers. Personally, my dad was not only the World's Greatest Dad, but he was pretty dang pessimistic. He didn't see the glass as half full. He saw the glass as empty — completely empty.
OK, so I accidentally roasted my dad, who I loved dearly. But the point is that negativity is ingrained in our culture and has been so for generations. For example, why do we revere rock stars who died at age 27? Jimi Hendrix, Jim Morrison, Janis Joplin, Kurt Cobain, and there's more — all dead at 27. What kind of sick culture is that?
But now, I release that negativity. Although it's hard for me to find obvious positivity in American mainstream culture, I find it all around me on a daily basis. Trees, flowers, birds — they're pretty amazing. My wife and family — they're breathtaking. My students — they overflow with goodness.
Back in the day, criticism of TV often ended with the line, "Well, you can at least turn it off."
Nowadays, turning off American schlock negativity is even harder. While I gave up cable news for good earlier this year and am deleting my Twitter account today, maybe the wisdom I have is that to truly be counterculture — like us Gen Xers — we have to choose positivity and gratitude over the NFL and Real Housewives.
So as I stop focusing on what's negative, I am opting to do even more of a digital detox in my life and soaking in what is good. When I do that, it feels so right to revel in gratitude and show that to others.
Happy Gratitude Month!
Posted by Joe Stevens at 1:07 PM No comments: