Ignorance is a choice 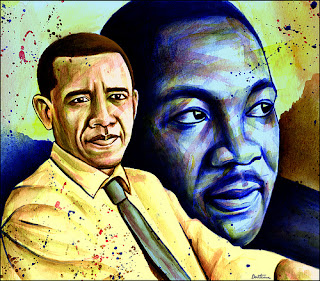 I heard an idea on "The Late Show with Stephen Colbert" the other day that affected me. The idea is this: Ignorance is a choice.

The rapper/activist Killer Mike was on the show, and he was asked if the events this year in Ferguson, Baltimore and North Charleston raised awareness among white people about systemic racism in America.

In Killer Mike's interview with Colbert, he mentioned the Brown Eyes/Blue Eyes Experiment conducted by Jane Elliott as something that white people can watch to try to understand racism better. Feel free to google that, or click on the video below to watch it.

As we are in the midst of Martin Luther King Jr. weekend, I am sick and tired of having this holiday as what the British call a mere "bank holiday" — just a day off. Or, if anything happens on MLK Day, it likely will be a celebration of Dr. King's accomplishments. While I have absolute respect for Dr. King and his accomplishments, I believe he would much rather have his holiday be a day of education.

The worst thing I have seen with MLK Day and Black History Month is the attitude that all is OK now. "Way to go America! See, we overcame racism. See what can happen if we all just work together! MLK was great. The president is even black. We did it!" ... Please, don't make me puke. 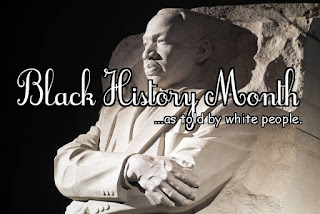 Here are simply three things I'd like to impart today that everyone — especially white people — needs to know.

1) Jim Crow laws were in effect in the United States until 1965. In other words, blacks officially were second-class citizens by law until 50 years ago.  Officially. The Jim Crow mantra of "separate but equal" means "not equal."

2) The new Jim Crow is the prison system, and this needs to be reformed ASAP. The United States has 5 percent of the world's population and 25 percent of the world's prisoners. Our present society is the most incarcerated society in the history of any civilization. The numbers are so staggering against minorities that it is fair to call this "official systemic racism."

People of color account for 60 percent of our prison system, while they comprise just 30 percent of the U.S. population. One in every 15 African-American men are incarcerated as opposed to one in every 106 white men.

And y'know what often happens: You go into prison on a nonviolent drug crime, then you come out as a career criminal. Beware. Once you go to prison, you may stay in prison.

Michelle Alexander's "The New Jim Crow: Mass Incarceration in the Age of Colorblindness" came out in 2010, and no true progress in the prison system has happened since then. Most white people have not heard of the book. 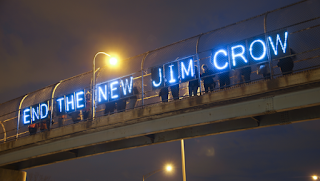 3) White people must revisit their stock answers. Jane Elliott points out how harmful it is when white people say: 1) I'm not racist. Some of my best friends are black, and 2) When I see you, I don't see a black person. I don't see color.

I see white people cringe if I ever bring up a racial issue with them — and I'm white myself. White people most likely will disregard this blog and continue to choose ignorance. But for anyone who does not accept this, what can they do?

Go ahead, and check out the video below. Perhaps act like your children — it's practically certain that they're less racist than you.

But more important, remember that MLK Day is not just a "bank holiday." This is an opportunity to reflect. Is America on the path we want it? Do I ever think actually consider others? Do I ever think about the prison system?

In 2016, please ask yourself: Is this the America I want?

Considering where America is today, I think of Fyodor Dostoevsky, who said, "The degree of civilization in a society can be judged by entering its prisons."
Posted by Joe Stevens at 9:06 AM No comments: