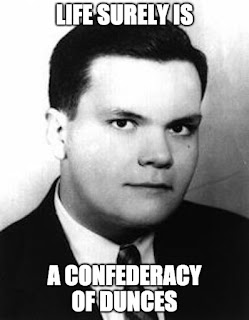 OK. After yesterday's entry on David Sedaris' Me Talk Pretty One Day with me, uh, not really remembering much about the book but insisting on its excellence, this project of 100 Nonfiction Books I Recommend can only get better.

So today's selection is A Confederacy of Dunces by John Kennedy Toole. Unfortunately, the book is clearly fiction. In fact, on the book cover it says "fiction." However, the category we're in is "humor." Somehow, having the book on this list makes sense to me. Oh, my pyloric valve.

Is this project officially off the rails or not?

I say not! To me, Confederacy of Dunces defies all categories. I say it should be on all book lists. Yes, all lists. Sports, religious, medieval, whatever. All lists! But always beware of absolutes.

A Confederacy of Dunces was published in 1980, 11 years after the death of its author John Kennedy Toole. It takes place in New Orleans and follows the oddball daily excursions of Ignatius J. Reilly, who lives at home with his mother. He's slovenly and misanthropic, and one of the most entertaining and ridiculous characters I've ever encountered. 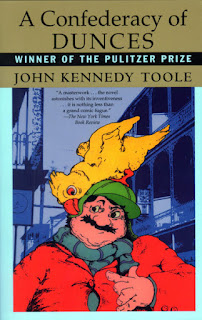 A Confederacy of Dunces is the oldest book on my list of 100 Nonfiction Books I Recommend. It is hilarious; it's a rare book that I've read more than once. I think in some ways it saved me, to be a reader.

I never truly read on my own until the summer before eighth grade. That was when I had back surgery, and we're talking 1986. I remember reading a few S.E. Hinton books and maybe some random stuff on sports and the planets.

Like many people, I equated reading with the stuff done in school. I don't believe we read full-length books from first to eighth grade. But then in high school, we got some novels. Mostly, I was assigned books to be appreciated and not to be loved. Dunces wasn't assigned in high school, but I believe a friend recommended it. It was actually a laugh-out-loud book that was enjoyable. Who knew this existed?!?

For a long time, when people would ask me my favorite book, I would say, "I dunno. A Confederacy of Dunces?" It turns out that question is so limiting and myopic. I have no single favorite book. I guess I'll always have a soft spot in my heart for this masterpiece. It turns out that significant literature can be hugely entertaining as well. Who knew?