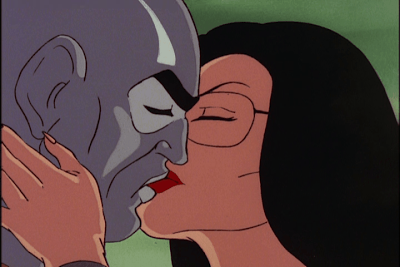 I would have never realized this, except Wolf Pack member Dave just asked, "Will this make you Destro?"

I proposed marriage to the woman I love, Dina, who I've described as, "Y'know, she looks like the Baroness from G.I. Joe."

This information means the following: I have proposed marriage to the Baroness. I am now Destro.

I did not know the complete Destro story, but based on intense Internet research, I have learned: "Destro's key characteristics are his sense of honor, a calm demeanor and love for Cobra's second-in-command, the Baroness."

One major difference between me and Destro, though, is that he is forced to wear a steel mask for crimes, while I have a more conventional head made by 100 percent Polack DNA.

This will be the second marriage for both me and the Baroness. I might argue that fact makes the marriage even more impressive. No myths. No fantasies. Just pure love, understanding and the ability to feel good daily and feel happy to see each other each day.

I could say the details of the romantic proposal. I did it on my 42nd birthday! I did it at the Walt Disney Concert Hall. That Frank Gehry — he deconstructs architectural standards with massive projects of impact. I might say that I got her father's blessing in advance and got down on a knee.

But, nah, let's have those details disappear. I just feel cool, knowing that I'm giddy over my girl, the Baroness, and she loves her Destro, AKA the Polack. 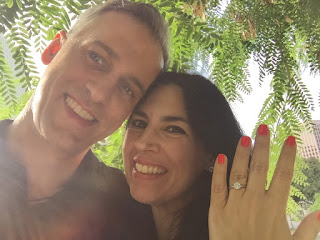 Yeah, Hawkeye will be hitting on her at the bar. Clutch will be making some advances after he fixes her car. I'll, too, get my fair share of winks from Scarlett. That's life when you're a couple in love: Destro and the Baroness.

Posted by Joe Stevens at 8:12 PM No comments:

Attempted retraction turns into diatribe No. 2 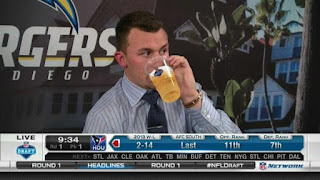 Meathooks has called for a retraction.

I lost a 25 cent bet to Cousin Paulie.

Cleveland is happy, and its residents will be making sweet, sweet love tonight because the Browns actually won a game.

What is my problem?

I just don't like him as a human being, a person. I try not to judge people, but when the weight of my Cleveland Browns falls on his 5-foot-6 shoulders, I believe I'm allowed to ponder this guy.

First of all, thank God the Browns beat the Tennessee Titans to improve to 1-1 and hold on for a 28-14 win. Manziel threw two touchdown bombs to Travis Benjamin, and those were the obvious offensive highlights. The first TD bomb on the second play of the game set the tone, and Johnny Football deserves major credit for that.

I've upgraded my thoughts on Manziel from "he's an absolute bust" to "let's wait and see — but he's probably a bust."

I am conflicted on whether I want him to be a bust. With a Browns first philosophy, I want him to work out and be a superstar. However, he is the most unlikable sports figure to don a Cleveland uniform — according to me.

I'm not even sure who's in the running. Albert Belle from the Indians was much-maligned. Ricky Davis from the Cavs could be redonkulous. I'm sure there have been plenty of criminals, but Manziel remains the biggest douche.

This could be a Snooze Button Generation (TM) gap. This punk is only 22, and I'm 41. Maybe there is a generation gap with this kid because I repeatedly look at him and think, "You got to be kidding me." 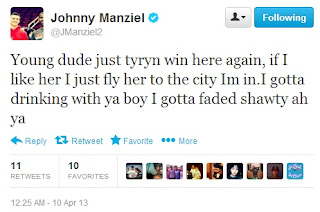 My gut tells me that Manziel still has the maturity of a flea. My gut says that he is all flash — and no substance. Even in football, he had two spectacular TD flings. But other than that, he was not good.

Johnny Football's success on the field may very well have to do with his mentality. I believe he has a highlight-reel mentality, but I'm not convinced he knows how to do little things to get a team to win.

I also surmise his personal life is like that. I bet he'd be a great guy to date because of the flash, but when it comes to hanging out at home and feeling chill, he'd be fumbling all night long.

Would I want my daughters to date him? Oh, God no. Would you want that for your daughters?

But, hey, let's put this all in perspective. The Browns won. They're 1-1, and they've been to the playoffs once in the past 20 years. Even if today ends up as the highlight of Manziel's career, we'll take it!

Posted by Joe Stevens at 4:34 PM No comments: 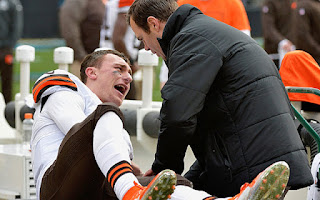 The most obvious connection is this:

Both towns have been without the NFL since 1996.

You might say I’m being too harsh to the Browns, who actually did go 7-9 last season — their third best record in the past 20 years.
But I was absolutely disgusted — yes, disgusted — with the team’s 31-10 loss to the New York Jets this past Sunday. It’s time to vent!

Here I am on Thursday still disgusted. The team had the entire offseason to prepare for the Jets, who went 4-12 last year, and was blown out in the opener.

I believe we all have issues. We all have anger. We have negative thoughts and feelings at times. I put all of mine onto one person: Johnny Manziel — the devil incarnate, a boy who doesn’t belong on the football field, a symbol of the dysfunction of the Cleveland Browns. He’s got to go, ASAP.

Manziel does not belong in the NFL. The jury isn’t still out on whether he can be productive in the league. He is NFL incompetent. We knew that last year. We still know that this year. The possibility of Manziel playing more for the Browns makes me want to puke.

See, a lot about being an NFL quarterback is about instincts. Manziel is not a “throw-first” passer. He’s not even a “run-first” passer. He was a college star whose game does not translate whatsoever to the NFL. He can’t be “Clockwork Oranged” into a player with instincts that work in the NFL. I feel embarrassed for my team and for my city when he’s on the field.

The fact that the Browns have him as the team’s backup quarterback irks me. The football people in the organization know that he will never be serviceable in the league. The ceiling on Johnny Manziel is “backup quarterback.” But his mentality and personality are so selfish and unhelpful, that role will not work. I say the Browns just cut his ass.

No one wants to admit mistakes. If somehow Manziel miraculously transforms his game into Andrew Luck’s or any legitimate starter in the league, then I will gladly print out this scathing column about him, place it next to my TV and remind myself how wrong I can be.

Unfortunately, I’m not wrong on this one. Manziel is the worst of the Browns’ 23 quarterbacks since coming back as a franchise in 1999. That list includes Colt McCoy and Seneca Wallace. Manziel couldn’t hold Seneca Wallace’s jock.

Have the Browns learned anything in 20 years?

You can’t just half-assedly pick Manziel because he won the Heisman, has a lot of Instragram followers and was around for the 22nd pick.

How in the world can he be selected that high and over Teddy Bridgewater and Derek Carr? 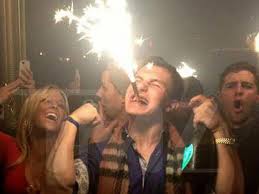 The Browns know very well that Manziel will never be a franchise quarterback. And what is the point of keeping around a 22-year-old dickhead who has no chance of being that franchise guy?

The team’s acquisition of Josh McCown was the best they could do for a stopgap until one day that miraculous franchise QB comes along. But it would have been nice if they had McCown and St. Ignatius’ own Brian Hoyer on the roster this year instead of Johnny Freakin’ Football.

Of course, the team is so dysfunctional that it became impossible to have that scenario because Hoyer attempted to be a leader and apparently that was unacceptable to the insecure brass of the team. Plus, the offensive coordinator from last year, Kyle Shanahan, asked to be released from his contract to become the offensive coordinator for the Atlanta Falcons. Egads! What madness!

The Browns are an absolute laughingstock. No exaggeration.

My daughters and I make fun of them. Yes, we will be watching this Sunday. I am praying to God that I don’t have to see Manziel play. I am hoping that Austin Davis passes him on the depth chart. I’d like to see a 24th Browns quarterback in 16 years.

Of course, I expect to hear this argument: “Manziel isn’t the only problem.”

But for a franchise that has had one playoff game in the past 20 years (a loss to the Steelers in 2002), the Browns’ dysfunction has been on display for so long that I can’t take this crap anymore. I’m especially frustrated now because the Browns went 7-9 last year, and there is absolutely no chance they can equal that this year. The team will be yet again taking a step back.

You might say, “Cool your jets. It’s only been one game!”

Only one of two things can happen to help me believe the franchise is headed in the right direction.
Jimmy Haslam sells the team. The whole culture and structure of the franchise needs to be blown up, and, ultimately, that is the only way that can possibly happen.

Hopefully, McCown will be cleared to play from his “concussion protocol,” and the Browns will have a fighting chance against the Tennessee Titans.

I’m actually jealous of the lame Titans. They have a shot at having a franchise quarterback with Marcus Minotta. The Browns have no chance at that with Manziel.

I’d rather have nothing than him.
Posted by Joe Stevens at 4:01 PM No comments: