We love the Score in Cleveland 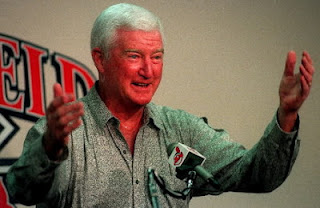 Back in the mid-90s, it was easy to make fun of Herb Score.

"There's a deep fly to center field. It's going, going. Wait a second. The shortstop Vizquel camps under the ball."

Herb Score also frequently said something that bordered on incomprehensible. He often said "down she low," which my friends and family deciphered to mean "down too low to be a strike."

OK. Herb was getting old at that point, but his voice brought calmness and happiness to Northeast Ohio. Herb was the Indians' broadcaster from 1968 to 1997, and it was easy to love him like our flawed Tribe. Yes, he mispronounced and forgot names now and again, but that added to his charm.

Memories of Herb Score are bouncing around for Snooze Button Generation CEO and founder Joe Stevens because he has been listening to Indians broadcasts this year on exotic Internet radio. The Tribe has been in first place in the American League Central for parts of the beginning of the season, and that's an unexpected bonus. Stevens feels at home and comforted by the voice and descriptions of Tom Hamilton, who worked with Herb from 1990 to 1997.

In May 1957, everything changed when he was struck in the face by a line drive and broke numerous bones in his face. He missed that entire season, and during his comeback, he tore a tendon in his arm. In essence, his career ended. 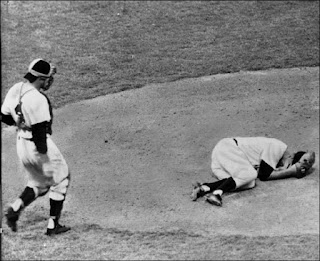 As a Cleveland sports fan, you are forced to subscribe to something called "love of the game." I would argue that being a Cleveland sports fan teaches humility and many key lessons to games and even life. Is the whole point - or only point - winning? It better not be, if you remain a Tribe fan.

Tom Hamilton, the current voice of the Indians, is a better, crisper announcer than Herb, but he certainly does not have the mystique that Herb had. In a tribute in The Cleveland Plain Dealer when Herb died in 2008, Hamilton was quoted as saying, "Herb tells me, 'Look, this isn't a very good team, but you can't let that affect how you do a ball game. Every game has to be treated equally.' It was the best advice I've ever gotten."

Herb's death in 2008 at age 75 followed 10 years of health problems that stemmed from an automobile accident in 1998, when he was driving to Florida one day after being elected into the Broadcasters Hall of Fame. He was severely hurt in the accident with a long list of injuries, including a fracture to the orbital bone around one of his eyes.

Hamilton has done an exemplary job for his 22 years with the Indians. He picked off great where the legend left off. "Down she low."

Posted by Joe Stevens at 4:32 PM No comments: