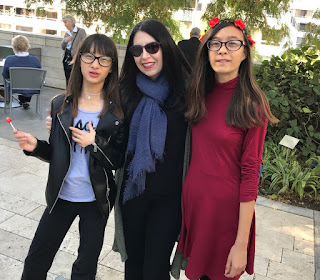 The last time Easter fell on April Fools Day was 1956. But let's add to the rarity of today because Valentine's Day also fell on the same day as Ash Wednesday. The last time that happened with Easter also on the fools day was 1945.

Hearts, ashes, fools and Jesus are aligned on the calendar, and does this mean anything? Are there any possible connections?

All converges today with the risen Christ, April Fools jokes and Dina, me and the girls being in Naples, Fla., to visit my in-laws. Also, I would like to brag and say that today will be the first day I will have a drink since Valentine's Day.

Yes, indeed, I gave up drinking for lent. Success! I feel better than ever. My God, that's 46 days without a drink. I physically feel better than ever, and I realize that I will not keep up my teetotaling ways. However, I was drinking craft beers like Doritos in the house. If they were there, I'd have them. It turns out that sparkling water and exercise are much more fulfilling than the IPAs.

I then was wondering why I was drinking so many IPAs. The basic reason: It was a bad habit. I would often have one while making dinner and one while eating dinner. That's two IPAs on a random Tuesday. Maybe that's not the worst thing in the world, but why did I need them?

The hardest day was the first Friday after Valentine's Day. I realized I was accustomed to "rewarding" myself with drinks after the work week in a potential workingman's homage to WMMS, the buzzard and its hard-rocking lineup of songs at 6 p.m. on a Friday. Then, I was thinking that, man, kids are bombarded with drinking ads, and college certainly has drinking omnipotent on campuses. There was more to giving up drinking than met my eye.

Then, I read a book, "Lost Connections" by Johann Hari, and I was thinking that the IPAs may have been replacing a lost connection for me. The book argues that the real causes of depression are more cultural and external than what the conventional thinking is with an individual's chemical imbalance.

I found the most interesting thing in the book being that the United States has one of the highest depression rates in the world, and the reason why is because Americans go about combatting depression as an individual problem. Many cultures view happiness as a collective mission. "If you're happy, I'm happy." In the U.S., we tend to think we're the only ones with the problem. "I better go see my doctor, get some meds and take care of this. Shh. No one needs to know about this." 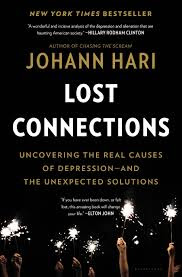 According to "Lost Connections," the lost connections that lead to depression are a disconnection from 1) meaningful work, 2) other people, 3) meaningful values, 4) childhood trauma, 5) status and respect, 6) nature and 7) a hopeful and secure future.

I'm not depressed, but I think about myself and wonder where I can connect more to have a fuller life. I also fully understand the irony of cell phones and personal technology, how the appearance of being more connected through that stuff is only an appearance. I also wonder about so many people I run across who just aren't feeling that great. What is the lost connection that they crave? How can they reconnect?

As I return to today being Easter, I realize that Easter isn't what it used to be — in my mind. I used to equate it close to Christmas and Thanksgiving as a holiday. In fact, I remember someone in my Catholic upbringing saying, "Easter is the most important holiday to a Catholic!"

Nowadays, what I like most about Easter is the idea of hope. There is hope. We can reconnect. We can have meaningful work, healthy relationships that matter, meaningful values and a bright future.

We can also make jokes on April Fools Day, get a Whoopee Cushion and blame that sound on grandma. We can celebrate Easter, eat some ham and reconnect in any way we want. Ironically, I'm probably going to reconnect with an IPA, my fake friend I used to know who, quite frankly, is only good in small doses.

I am hopeful that I will stay in the social drinking zone and not ever feel the need to drink to excess. Heck, maybe that's just what my 44-year-old body is telling me.