Non-conformists unite with their art 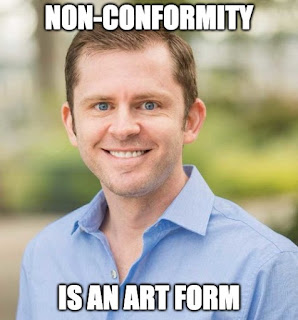 As much as I've tried to conform to, uh, anything, I realize that I'm a non-conformist by nature. In the fabric of myself, I understand that being different, not conforming, is a positive thing. I am me, and that's how it is.

Heck, back in the '90s, glorious Arby's had the slogan "Different is good." If that phrase works for a fast-food restaurant of roast beef and horsey sauce, then it works for me. Nowadays, I am unsure what to make of Arby's new motto: "We have the meats!"

Whatever the case, I responded to Chris Guillebeau's The Art of Non-Conformity (2010) because the book gave me license to embrace my non-conformist ways and open my eyes more to unspoken assumptions that are made all of the time.

One major point to Guillebeau's book is that we should embrace life as a constant adventure. I couldn't agree more, and the book helped me see that we have a lot of power to live the adventure of our choosing.

As a Gen Xer growing up, I had it in my mind that I was supposed to go to college, then make a living ASAP. I did that. Was that really my best life in my 20s?

The good news is that I was a newspaper journalist, and adventure is a part of that gig. However, I had it in my mind that I needed to have a steady job, health insurance and do something that others would see as "respectable." All of those notions might have limited me. 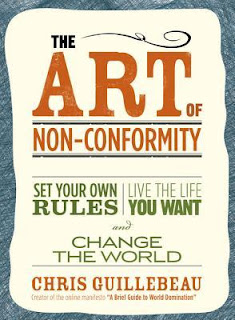 Guillebeau promotes radical goal setting, and I like that — within reason. Too often people shoot too low with their goals, and while modesty can be a good trait, it sometimes kills risk-taking and hinders success. If a risk weren't taken with a goal, is it really a success?

Over the past few years, Guillebeau has focused on creative self-employment. He has another book coming out soon called 100 Side Hustles, and it focuses on creative ways to make money while keeping your day job.

I wonder how many of us are conformists vs. non-conformists. What do we strive for? I've dabbled in conformity, now and again, and it just feels forced. I must say it was freeing for me to accept the fact that in many ways, I am hindered by my non-conformist ways. Or am I freed?

Email ThisBlogThis!Share to TwitterShare to FacebookShare to Pinterest
Labels: 100 nonfiction books I recommend, Joe Stevens writer, The Art of Non-Conformity by Chris Guillebeau