Asking for help is an art 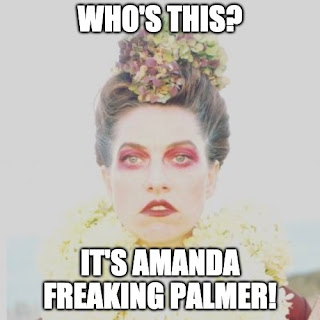 Amanda Palmer used to be one of those human statues outside of museums. She wasn't a panhandler. No, she offered live art. High foot traffic trounced past, and she received enough money from tourists to survive.

In The Art of Asking, Palmer poignantly explains the significance of her nonverbal exchanges as a human statue and how so many people were desperate for just a glimpse of humanity, of connection. She received loose change or a mere dollar or two, and she gave the onlookers an item in return — a small flower.

Palmer's perspective is refreshing and unique. Her views about the importance of art remind me of what my friends and I used to say, and believe, in college. Then, as time progressed, maybe we still felt passionately about art, but it fell to the background of our lives as we conformed to being proper American consumers with our hours being blasted away through day jobs.

I learned a lot about myself through Palmer's 2015 book, and the first thing was that as a Gen Xer, I am sometimes out of it when it comes to what's popular, social media and what's viral. I had not heard of Amanda Palmer before I read her book. She has a popular band, the Dresden Dolls, and has more than 1 million Twitter followers. I had no clue.

Also, a big reason why she's so well-known is that she did a Kickerstarter campaign that raised $1.2 million in 2012 to release a solo album. She has reportedly raised $2.8 million through crowdfunding, and let's face it, a huge reason for the book is that people want to know this: Just how in the world did you do that? 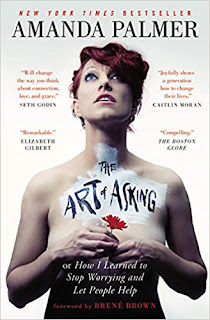 What's kind of refreshing to know is that there is no short cut or get-rich scheme to be a wizard at crowdfunding. Palmer has cultivated a major following. She's networked with major players, and she is a player herself. She's unique, and in an era of cookie-cutter personalities, people respond to her.

I like her, but she receives a lot of hate on the Interwebs. Are these haters just jealous? I say, keep doing what you're doing, Amanda.

One takeaway I had from The Art of Asking was how "asking" is much different than "begging." I'm a firm believer that the world is full of givers and takes. I'm certainly a giver, and I like to think that Amanda Palmer is a giver, too.

She is committed to her music, art, Twitter life and a non-cookie cutter life. When she was giving away flowers as a human statue, well, that's giving. That's not taking. She provided a creative service for others; she has worked for what she has and her popularity.

Another takeaway is that you just can't go at things alone. Nobody would ever get anywhere alone. There would be no roads, no cars, no directions. We are all united, more than we realize, and we might as well embrace that.

Email ThisBlogThis!Share to TwitterShare to FacebookShare to Pinterest
Labels: 100 nonfiction books I recommend, Joe Stevens writer, The Art of Asking by Amanda Palmer