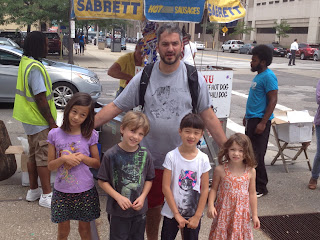 One of the highlights of my life is my annual two-week summer trip to my own personal nirvana, Cleveland.

Why is Cleveland so spectacular? Well, besides its vibrant economy and championship sports teams, I have a lot of important family and friends there, and I feel most at home there.

My itinerary was so jam-packed of goodness that I must list some of the highlights of what I did.

July 1 — Sophie, Chloe and I arrive in Cleveland. We examine the best Top Hand (pinball) scores in the history of the game. I somehow scored more than 8,000 about 15 years ago. I try my best to do better than that on the trip, and the best I score is 5,982.

July 2 — Daytime: The World's Most Dependable Man and I haul four children ages 8 and under to downtown Cleveland. Ultimately, the grit of the city is not as kid-friendly as I had hoped. Evening: Chloe has her sixth birthday party on her actual birthday with many key family and friends and a defeated piñata.

July 3 —By this time, I had tried various Great Lakes beers. Burning River, most likely, is my favorite, although Commodore Perry is in the running.

July 4 — Sophie and Chloe witness their first-ever Fourth of July parade at Chippewa Lake. I scold my girlfriend for using the term "white trash." Chloe goes "tubing" on Uncle Ed's boat. We then spend the rest of the day in Westlake at Fred and Judi's. There are fireworks at night, but the real fireworks come when J.T., Neal and I throw Fred into his newly purchased pool. 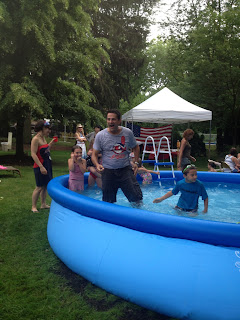 July 5 — I finally get some lone time to check out some cool Cleveland stuff. I beeline to the House of Horrors, where three ladies were held captive as slaves for many years. I remark how close it is to my high school, St. Ignatius, and the glorious Great Lakes Brewery. I, obviously, go to Great Lakes and another brewery across the street. I even meet up with my friend Doug at the world-famous Harbor Inn.

July 6 — Jack turns 7, and we bowl and celebrate his age.

July 7 — The Stevens family celebrates Ed and Amy's 25th anniversary at Medina Country Club. Afterward, my mom, Fred, Uncle Bob and I play at Medina C.C. The girls enjoy a day at Chippewa in which Sophie goes "tubing."

July 8 — Sophie and Chloe see their first Cleveland Indians game. It rains for nearly the entire game, yet it is played. The Tribe, who I predict will win another World Series in 2048, lose in extra innings to the Detroit Tigers. However, the Tribe does not allow ace pitcher Max Scherzer improve to 14-0. He stays at 13-0, which is still the best start in Major League Baseball since 1986. 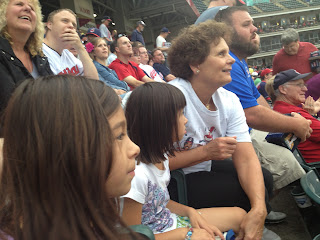 July 9 — Sophie, Chloe, Jake and Ellie and I visit The World's Most Dependable Man in Cleveland Heights to slip 'n' slide. It is awesome!

July 10 — We hit up Geauga Lake's Wild Water Kingdom. This is doubly awesome! Unfortunately, a tornado warning closes down the park only about two hours into our fun. Bummer. We then go to Kim and Ron's, where they have an at-home movie theater. The kids watch "Annie."

July 11 — Afternoon: Grandma and I play "The Buzzard's Nest," five holes of golf at Hinckley Hills Golf Course, with Sophie and Chloe with us. Both of the girls actually drive the golf carts. Night: Three-fourths of the original wolf pack unite as I meet up with Jeff and Cato. Dave cannot make the commute for a full reunion because North Carolina is slightly too far.

July 12 — Fred, Carlos, Neal and I play Sleepy Hollow. I have one of the worst rounds of the last year. Oh well, I try to impress the boys with my new-found golf skills, and I try too hard. It happens.

July 13 — Day: We fish in Hudson. Jack and Carlos actually catch a fish. Evening: Grandma treats Sophie, Chloe, Jack and Ellie in a group of 10 to "The Lion King" at the State Theatre. 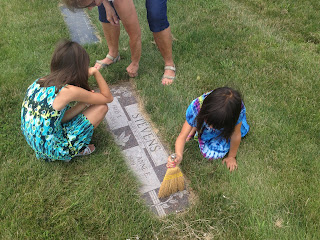 July 14 — The girls, Grandma and I visit the XMan's grave site. We conclude the trip by having fun at Fred and Judi's with the kids having fun in the pool.

What does all of this mean? Well, I enjoyed my childhood in Cleveland, and I want to give my girls a taste of what I had. Of course, they got a full-blown, mega-awesome childhood out here in Long Beach, California, with me. But a Tribe game for the first time? A water park? Chippewa Lake, and hardcore Grandma time? This is so good for them — and me. We're talking about the girls spending time with people who I, and them now, deeply love. Yeah, man, deeply love.

As a side note, some of the important adults in our lives were going through difficult times in Cleveland, and, most likely, that was hard on everyone who knows them. But I subscribe to many philosophies, and one key one is that my girls are my happy pills. Spending time with them in Cleveland likely will be a highlight of my life for the next 10 years, and after those 10 years, the Tribe only will be 25 years away from their championship.