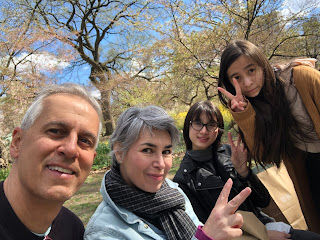 That's what I heard from the server in a hip East Village eatery for brunch on Easter.

My, how our demographics have changed as Gen Xers! I lived in New York City back in the '90s, during part of my 20s. Last week, I explored the city with my beautiful wife, Dina, and our teenage daughters.

Apparently, Dina and I end up in NYC every three years or so, but this was the first time with the girls. Overall, we had a blast, ate some fuhgettaboutit food and did some solid touring, including going to the top of the Freedom Tower and seeing Wicked.

I guess I'm slow, and I should've realized this earlier. But my big takeaway was how NYC is such a youthful city, and no matter how darn cool I know I am, I can not pass for a 20-something hipster. We stayed in the Lower East Side at Public, an Ian Schrager hotel. He is famous for founding Studio 54, and the hotel attracts hipsters, not families. Coming to grips with my demographic was in my face as soon as we checked in.

Daughters? How could he assume that? And what's up with him calling me 'Sir'? Well, I guess I've been "Sir" for a while by now.

I quickly learned not to care about the dad treatment bestowed on me by NYC. But that's easier said than done.

A lot of New York memories flooded back as I would "stand clear of the closing doors, please," or when I saw the site of the Tic Tac Toe chicken in Chinatown or when I showed the girls where I used to live in Washington Square Village. I broke new ground, touring the city in full-fledged dad mode.

Anyone who knows me well knows that I'm probably the best parent to ever exist. A lot of fellow Gen Xers believe being a topnotch parent means losing their own lives, being a helicopter or bulldozer or treating their kids like little emperors. "Dad, make me a sandwich!" "Oh, yes Emperor Jaden, I'll get right on that!"

No, no, taking my cues from Julie Lythcott-Haims and her 2015 masterpiece How To Raise An Adult, I feel like Dina and I do what's right for us and the kids. We're on the same page, and we will always be. That doesn't mean we don't disagree. The kids don't dominate us; we don't dominate them. Hopefully, we put them in a position to develop character traits, such as grit, empathy, kindness and connection, that will serve them well in life. I guess that's my version of parenting.

Back to NYC, where Dina and I hit the streets with these beautiful teenage daughters as I remain a gray-haired dude who likes the Cleveland Guardians. 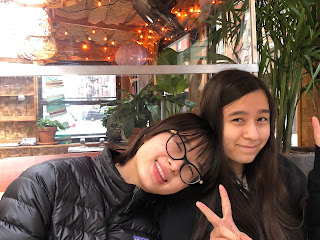 It's the girls' time now. While they're a freshman and junior in high school, I enjoy watching them find their way educationally, socially and emotionally. They don't need me like when they were younger, but I'm hoping we stay close and they understand I truly love and support them.
Being a dad has been such a huge part of my identity for the past 17 years, and I have found it slightly difficult to transition to dad of teenagers. The main reason is because my role is much different now. Deep down, I might be mourning the loss of stuffed animals, bubbles, board games and sidewalk chalk. They're studying for AP tests now, and I've accepted that's where we are.
Somehow, New York accentuated this transition to me, and, overall, this is how life goes. I'm learning to get out of the girls' way and be there for them, when needed — mostly for my credit card. As the girls grow, I believe Dina and I will become even closer as they go to college, figure out their careers and navigate relationships.
I believe every generation has a different version of what they perceive as "cool." Obviously, I am superbly cool to Gen Xers. But to Millennials and the Gen Z crew, I'm a total dad. Don't they know how well-versed I am with indie rock and being disenchanted?
Maybe that version of cool doesn't exist in 2022. Maybe the girls have somehow out-cooled me. They probably belong in Manhattan more than I do nowadays. It's just too bad they'll never lose to a chicken in Tic Tac Toe.
Posted by Joe Stevens at 9:03 AM 3 comments: