We can all glean ideas from tiger moms 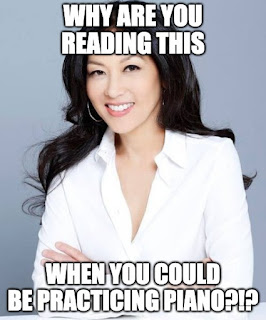 When Battle Hymn of the Tiger Mother came out in 2011, it caused quite a stir. However, upon reading it for myself, I realized that the book was misinterpreted. At least, I felt that way.

Amy Chua's "tiger mom" book does not portray her as an over-the-edge, strive-at-any-cost mom. Not really. It is, like its title says, an anthem for moms like her. I walked away from the book, thinking that I needed to push my kids more at times and not be so gosh darn permissive.

It's hard for me to think of a book more in my demographic. I teach at a school with an Asian population of about 65 percent. My daughters are half Asian, and Chua's husband is white.

I could relate to a lot of the exchanges between her and husband and the dynamic of having two much different daughters. She does retreat, at times, from traditional Chinese parenting, and I believe a lesson to all is that young parents may not think closely enough about family history and parenting style. Chua obviously does, and I recommend being proactive in looking at the parenting styles of oneself and the spouse.

I venture to say that most parents, especially from different ethnic backgrounds, have to accept the other's style or find a middle ground. In Battle Hymn of the Tiger Mother, those different styles are on display for the whole world to see, and I appreciate Chua's candor and letting us into her world. 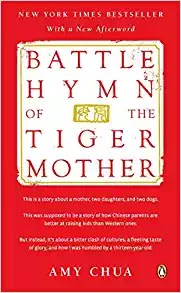 Chua has become a celebrity since the tiger mom book, and I find her 2014 book also interesting, The Triple Package: How Three Unlikely Traits Explain the Rise and Fall of Cultural Groups in America co-written with her husband Jed Rubenfeld. Those three traits are a superiority complex, insecurity and impulse control.

Asians in America have long been described as "the model minority," which is definitely stereotypical, especially considering the vast diversity within the Asian-American community. However, I often do see a superiority complex, insecurity and impulse control with my Asian-American students.

The trait that strikes me as most interesting for success is insecurity. It's likely true, especially for achievers who commit to some type of hard-working life that can be spiritually vacuous. How else can we explain wildly successful attorneys?

Anyway, if you haven't read it yet, check out the tiger mom book. It's also nice to watch how Chua's life and writing career are progressing.