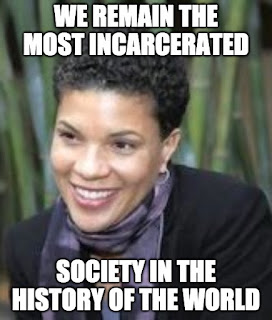 I love America. Let's go ahead and say that. I love the ideals, the diversity, the hope. I'm sold. The United States of America is bomb.

However ... America is more than ideals and hope. It's also about results. I love the United States so much that when results show that something needs improvement, it is our duty to come together and improve it.

Arguably, no other system in the U.S. needs more improvement than the for-profit prison system. This statement is not hyperbole because the hard facts and statistics show that men of color are disproportionately imprisoned in a systematic manner — big time. It is reprehensible, and the prison system's problems need to be at least a dialogue among the average citizen.

Michelle Alexander, a law professor at my alma mater Ohio State, has been crusading about the prison system for years, and I think "Michelle Alexander" should be a household name. Her 2010 book The New Jim Crow: Mass Incarceration in the Age of Colorblindness should be required reading for all.

The U.S. today is the most incarcerated society, by percentage and by raw numbers, in the history of the civilized word. We have 2.3 million prisoners, which I once wrote is the size of the fourth biggest city in our nation. Tons of statistics are outrageous with the prison system, and the one I'd like to focus on today is that we spend $32,000 per year on each prisoner. 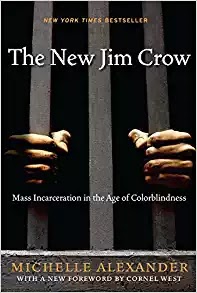 Of course, Alexander does much more in The New Jim Crow than only look at the ridiculous cost of prisoners and that this money goes to for-profit companies. She goes in depth with statistics and hard facts and shows how the prison system systemically focuses on people of color and destroys lives, families and communities.

Why do courtroom drama shows exist when only 6 percent of state felonies go to trial and 3 percent of federal ones do? Why do we believe a crime has only to do with the criminal and not to do with our society or the so-called "criminal's" background and all of us?

That brings us to the $32,000 per year per prisoner. Why do we devote that much money to a punishment system that rarely reforms the prisoner?

Well, you guessed it. It helps the bottomline and stock positioning of corporations connected to the prison system. The prison system, like our addicting Starbucks and Apple, wants to keep its customers to continue to make its profits. In this case, the customers are literally prisoners.

Yes, this is messed up! This is not what the prison system in most developed countries does because their systems are not private and for profit.

No magic solution exists to this catastrophic system. I would go with decriminalizing drug offenses and reforming many criminal-justice laws as a start. But I also would add having the average person understand the situation and at least have more dialogue about it.