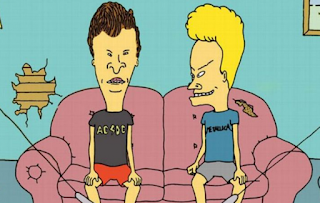 I should have known this a long time ago, but as I was writing about 10 humor books in 100 Nonfiction Books I Recommend, I realized that, "Uh, yeah, I was raised on TV."

No doubt. Gen Xers remember Saturday morning cartoons, Late Night with David Letterman, Beavis & Butthead and could itemize details and trivia of countless shows. I guess it should be no surprise how screen time has bombarded the planet and how the masses read less and less books.

I guess it's strange to have these thoughts in the "humor" section of this project, but it's just utterly apparent that books are just not the main media for so many of the writers in the section. So be it.

It is utterly obvious, but humor must be funny. But nowadays, I just don't find overly innocuous comedy interesting. It's got to have edge. It's got to be timely. It's got to be authentic and help our world. I don't know if I want to spend time on stuff that is just mindlessly funny. Not good enough for me.

The choices on this list are like that. Here are 10 comedy, or humor, books that I recommend:

Yes, books still exist as does TV. I am hoping that "quick-hit" comedy, like in Tweets or vines or whatever the tech platform is, does not replace nuanced, thoughtful humor that is funny, truthful and quick. Everyday life has been evolving, and I do believe excellent humor can cross generational boundaries. I hope.