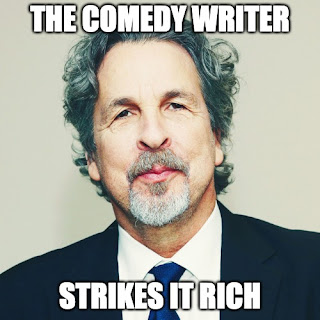 Uh oh. Here is another case of fiction/nonfiction trouble that arose a few days ago when A Confederacy of Dunces cracked this project called 100 Nonfiction Books I Recommend.

A Confederacy of Dunces is clearly fiction. However, because this is the humor section of this project, I said, "Eh, why not? Let's get it in there."

Now, The Comedy Writer by Peter Farrelly is officially filed under fiction. But I find it a much different case than Dunces because there are so many striking similarities to Farrelly's actual life, that it's not as big of a stretch.

Heck, the Wikipedia entry on the book says, "Because many of the exploits of the protagonist are similar or identical to the author Peter Farrelly's own life, it is believed that the novel is partly (or mostly) autobiographical."

OK. That's good enough for me. We're calling it nonfiction.

But who cares, really? The Comedy Writer (1998) is funny and truthful, and it was all down hill for Farrelly's career after it. Uh, well, that statement might be slightly off as he just won Oscars for Green Book last year. He was established when the book came out as his first two films Dumb and Dumber (1994) and Kingpin (1996) already were hits. Then, Something About Mary came out the same year as this book.

OK, so practically everyone in Hollywood is envious of his success. But I'm not so sure the literary world does. But heck, I'm sure he could write a twisted memoir that would be entertaining and a ginormous best seller. 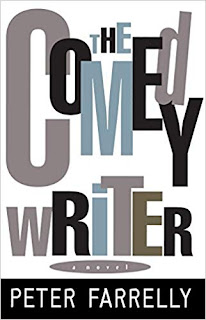 The main reasons The Comedy Writer makes the list is that it's damn entertaining and I could relate to it. The protagonist quits his job in New England, and it follows his constant rejections and difficulties in L.A.

It came out the same year I moved to L.A., and believe me, I experienced major culture shock going from New York to L.A. Moving from Cleveland to New York actually wasn't that big of a shock, but New York to L.A. — big-time shock.

Of all the things from The Comedy Writer, the one thing I remember most is the description of Los Angeles after rain — rare rain. The city needs more rain, as we all know, and when the rain finally comes, it wipes away the smog. Everything feels clearer and cleaner. The morning after rain can have a vague mystical feeling, where anything feels possible.

Yeah, I remember a passage similar to that. Comedy, many say, is the hardest thing to write because the expectation is to get an actual physical, laugh-out-loud reaction. Farrelly has been a master at that for decades. Franks and beans! Franks and beans!