How can we live with dark money? 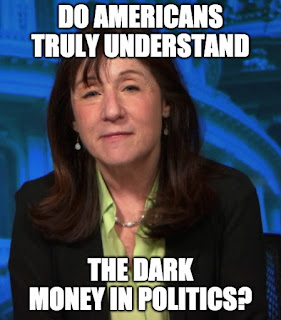 Ethics. I think it's fair to say that corporations and billionaires owe themselves and society ethical actions that are good for not just a few, but the whole.

So when I read the hugely important Dark Money (2016) by Jane Mayer I was outraged by the shady and unethical actions of the Koch brothers in a political system that somehow allows it.

Now, instead of going through Mayer's award-winning reporting of the b.s. nonprofits set up by the Koch brothers and the repeated buying of Republican nominees, I would like to address a different angle.

I believe that democracy is not a right, but a privilege. And with this privilege, we owe it to ourselves and society to be educated on how our democracy works, how our economic system works and what our focus of improvements should be.

So while Dark Money is a necessary and wonderful book, I will leave it to the reader to check out the book and see how billionaire money works with our political system. Yeah, there are a few dry spells in the meticulously reported book, but it left me upset that corporate campaign donations and special interest lobbies typically are hidden from the average American. 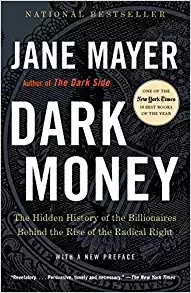 So I ask this question: Is it possible for the average American to escape the rhetoric of cable news, politicians and their own prejudices to understand how government and capitalism work in 2019?

I want to say "yes," but the truth is that most Americans are oppressed and don't even realize it. They are stuck in constant "entertainment" consumerism and are either in debt or working crazy long hours just to stay afloat. Do they actually have time, or the drive, to understand the immorality and power of the Koch brothers and similar billionaires?

I'm not so sure they do. They rather escape, and if they turn to a news outlet, it is most likely going to be a corporate one that plays into whatever their limited ideology is. Never will those outlets underscore that they are for profit, and they'll be back — "right after this commercial break."

What we have in our current political climate is what happens when capitalism goes unchecked at the top. The top has gotten so powerful that it can go ahead, own politicians and make its own rules. For the love of God, look at all of the rollbacks in the current administration. It's unacceptable.

Now, sure, this has been happening for at least 40 years and possibly throughout our country's history. But on this mass scale with obfuscating escape devices — the phone — literally in everyone's pockets, I just don't see how the powerful just aren't going to keep getting more powerful and the average person will stay ignorant.

Yeah, we are in the era of "fake news," constant Tweets of goofiness from the president and hardly agreed upon sources of news. It's hard to blame ourselves, and I'm not doing that. But it's time to understand that things like dark money in politics are absolutely real, not some conspiracy.

This is a bipartisan issue. It's time we stop doing the same things and same escapes and improve ourselves and our world.