We oppress and are oppressed 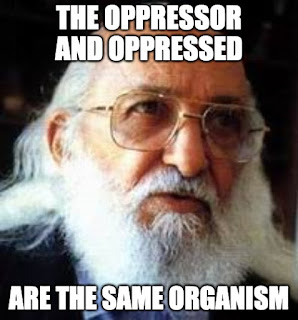 What the heck is this?

That's what I was thinking when I started reading Pedagogy of the Oppressed (1968) by Paolo Freire. Some parts were difficult to understand. Others seemed too wordy. Freire is Brazilian, so it originally was in Portuguese. I wondered if I were losing something in the translation.

But boom, clap, here it comes. Soon, I got the concepts in the book, and I was astounded by how deep and progressive they were. This was written in 1968?

The society and classrooms that Freire describes remain the norm in 2019, and I wish the world soaked in his ideas and applied them.

A major concept in Pedagogy of the Oppressed is that the educational model we have is based on the colonizer and colonized. So we look at students as empty vessels that need to be filled with knowledge. I see that teachers do that, or think that way, to this day. But when we do this, it dehumanizes the student. It perpetuates the colonizer model and doesn't serve either the student or teacher.

Rather, what we should strive for is for the teacher and student to work in tandem with discovering, understanding and creating knowledge. As educators, we are not bestowing knowledge onto others. Instead, we are opening the student, guiding the student and modeling humanity. 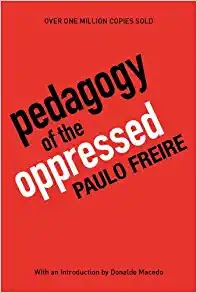 I had assumed that the goal of society is to be the winner, be the billionaire. Unfortunately, the billionaire lives a sick life. Yes, I say that about Oprah, Bill Gates, Mark Cuban, Jeff Bezos or any oppressor that comes to mind.

We live in a sick society that lauds the oppressor. Billionaires are our saviors of some sorts. This is who we should aspire to be. We want to be one of these 2,208 billionaires in the world or 585 in the United States. It's mathematically bonkers. That's the carrot dangling in front of the capitalists who make up a large part of the 7.7 billion people in the world.

These guys can go ahead and own sports teams, create TV specials on Michael Jackson or fund any little company they please. But they are equally the problem, and the only way to enact major change is for them to understand this. Heck, the average person needs to get this, too.

Look, I don't want to oversimplify Pedagogy of the Oppressed because there is much more to the book than the idea that the oppressed and oppressor are one of the same. However, I felt inclined to focus on this important concept because it is where we are in 21st century U.S. economics.

Our lauding of billionaires needs to stop. Unfortunately, they have so much wealth and power that they can create fake images of themselves that we believe. Billionaires, and a lot of us nowadays, live in worlds of make believe, and in a land of oppression, both the oppressor and oppressed lose.

Email ThisBlogThis!Share to TwitterShare to FacebookShare to Pinterest
Labels: 100 nonfiction books I recommend, Joe Stevens writer, Pedagogy of the Oppressed by Paolo Freire