The King of Meaningful Comedy 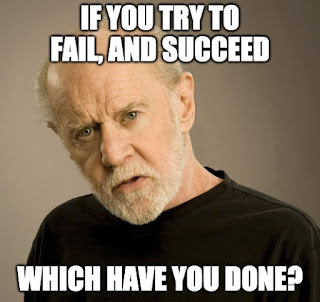 I guess this majorly important point could come out at any point of this project, but somehow, it is coming today as I recommend Brain Drippings by George Carlin.

Geez, man, when you look at the list of 100 Nonfiction Books I Recommend, so many of the books are not the main media focus of the author. That is obviously the case with George Carlin as it is with Peter Farrelly, Brian Grazer and many more.

But the real issue is this: "What about the authors who I thought the book was the main thing?"

It turns out that hardly is the case. So many of were already known before their books or had incredible social-media presences or were renowned in their field, then the book. The idea that books come out of nowhere and become accepted as unabashed masterpieces, like A Confederacy of Dunces, is false. And, heck, John Kennedy Toole killed himself before his book was even published. 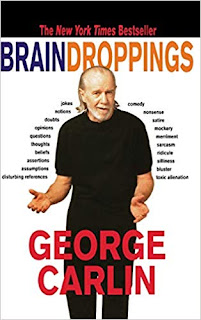 Brain Droppings is full of wordplay, social commentary, edge and has some of Carlin's best material, including his famous "A Place for My Stuff" and "Baseball and Football." To think about what Carlin did in his career is astounding. He was such a witty commentator, so ahead of his time and authentic.