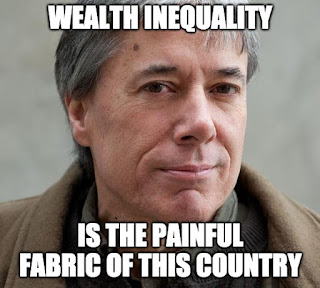 Quite frankly, I would like my daughters and their children (if they choose to have them) to have choices in life. I hope they get to choose occupations that fit their passions and that they pay for their children's college.

To me, that should be available for all Americans. Unfortunately, it is not.

I have read no other book that has illuminated wealth distribution and our collective responsibility about it than Chuck Collins' Born on Third Base (2016). He is a "one-percenter," and he makes the argument that we need to be aware of wealth distribution and how it affects us. He also points out how many of us live false narratives when it comes to wealth. Actually, he does much more than that, but that was where I connected when I read it.

First of all, the majority of Americans own basically nothing. The net worth of the average American is $97,000, which to me is hardly nothing when we consider the costs of homes and cars and basic things. What also is sad is that 20 percent of Americans are in the hole or worth under $4,800. Ouch.

Here is where a major misconception occurs. When we casually talk about the problems of wealth distribution, we point to the one-percenters as the problem. That's not exactly accurate. If anyone has $10 million in assets, I say good for you! Heck, because I am unabashed capitalist, I say assets of $50 million are getting pretty high, but, OK, keep your $50 million. 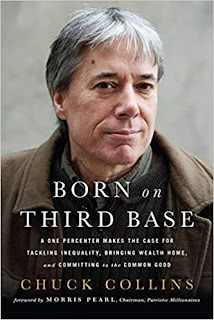 Here is where we will present bold ideas. In Collins' book, he sees a United States that is for the common good, not the good of a few. But first things first, we must make sure that individuals are educated on what wealth distribution actually is.

Yet the political agenda for the Republican party (and the Democrat party, too, but to a lesser degree) favors those 585 billionaires more than anyone. How is this happening?

It is not capitalism vs. socialism. It is about power and wealth gone wrong — big time — and so now what?

Collins has a conscience, and part of his argument is aimed at one-percenters to develop a better ethical understanding and see that their wealth can be for the greater good. Good point. However, the real problem is the .00085 percenters.

I am more concerned about voters understanding the truth of where we are with wealth distribution and then acting accordingly. I cannot bestow my values on others, but I can say that, to me, the out of whack wealth distribution is the No. 1 problem our country faces.

The reason why it's No. 1 is simple: All other issues stem from it. When we look at the problems of the health-care system, prison system, gun lobby, big tech, student loans and practically any of our 21st century issues, they would not exist without the .00085 percenters.

I simply cannot fathom why we tax wages and do not tax assets. That makes absolutely no sense to me. It's OK to have some holdings and pay no taxes. But if you actually work for your living, we're going to tax it. Why is that fair? Huh?

But the real problem is not only the .00085 percenters but those who are worth more than $50 million. These folks need to pay way more in taxes and create more actual non-profits that do something. And that's another can of worms because many non-profits are just tax shields. Democrats, Republicans, everybody. I think we can all agree on this.

Email ThisBlogThis!Share to TwitterShare to FacebookShare to Pinterest
Labels: 100 nonfiction books I recommend, Born on Third Base by Chuck Collins, Joe Stevens writer