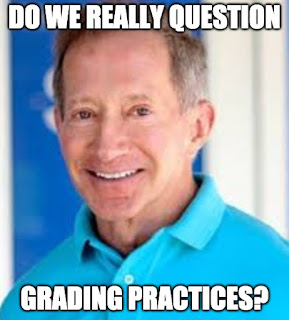 I have been fortunate enough to try many experiments in my classroom, and some succeed while others don't. However, I have never done anything wildly innovative with grades.

My biggest innovations are to start the grading scale at 50 percent. So the scale goes from 50-100. There are, hence, no zeroes. I also eliminated the D, so students can only receive A, B, C or F.

But I see this fact, day in and day: Grades hold students back.

The grading system doesn't encourage education and learning. Rather, it encourages doing the minimum to get the grade. It's a messed up system that perpetuates the minimum required and hinders growth. I'm a part of this.

I believe educators should question and improve their grading practices, and I highly recommend On Your Mark: Challenging the Conventions of Grading and Reporting (2014) by Thomas Guskey as a starting point. The great thing about this book is that it opens the door to mere questioning and does not make official judgement calls. It's open to interpretation, and I think that was a smart tactic because most people, especially educators, don't like to admit when they've made mistakes.

What is the point of grades in the first place? To me, they are a communication device to the student and parent. However, I also question if I would give grades if I didn't have to.

Ideally, grades should reflect learning. In reality, grades typically reward "doing the work" or "remembering the answers." Plus, in many classrooms, learning isn't happening either by design or by accident. It's by design when the teacher sets up a system that rewards going-through-the-motions type of assignments, and it's accidental when the teacher doesn't have a read on a student's starting point and progress. 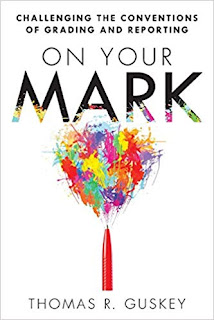 Of course, let's have some sympathy for our teachers. The fact that they unwittingly participate in ineffective grading practices isn't their fault. Discussion of grading practices often is taboo in schools, and most educators don't realize how arbitrary their grading rules are.

I have probably given less than five F's in my 12 years as a high-school teacher. I pride myself with this because for students below grade level, and believe me there are numerous, I figure out where to meet them where they are and have them move forward. If a kid comes in as a freshman with a fourth-grade reading but leaves with a seventh-grade reading level, that's success. Right?

When I talk to teachers who give a lot of F's, the normal answer why is the student "just didn't do anything." OK, but where are they in regards to the standards? Are they failing the tests? What is the home situation like? Have you been teaching in different ways to help the student? This "just didn't do anything" is a red flag of some sort. What is this particular red flag?

I understand that we shouldn't just pass through students who are scholastically incompetent, but I personally take F's to heart and find ways for my students to learn and earn a passing grade.

A's also are problematic. I have five components to grading. By doing that, students can do poorly on tests and still get a good grade. The problem with my system is that some students figure out how to finesse it and not actually advance as much as they should.

Perhaps it's time to call grades what they really are — meaningless at best and stifling at worst.

Email ThisBlogThis!Share to TwitterShare to FacebookShare to Pinterest
Labels: 100 nonfiction books I recommend, Joe Stevens writer/teacher, On Your Mark by Thomas Guskey