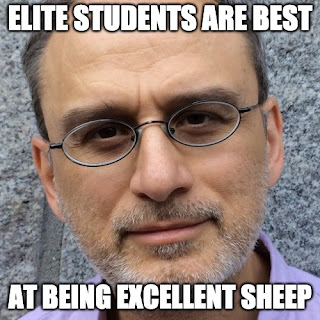 Over the past 30 years, it's been shocking to see the shift of college majors. It has been a "major shift" to business and finance, especially in the Ivy League.

In fact, the most popular major nationwide now is business and management, which is more than double as popular as second-place nursing. This also does not count finance and accounting, which is ranked eighth.

William Deresiewicz was alarmed by the bombardment of business majors and what he witnessed teaching at Yale. So he put together a manifesto on the mindless pursuit of vocational training in the Ivy League in Excellent Sheep: The Miseducation of the American Elite and the Way to a Meaningful Life (2014).

Deresiewicz discovered that so many students are all doing the same thing. They're sheep. Excellent sheep. The business and finance majors have overtaken the Ivy League, and this calls into question the point of education and how this affects American culture.

Less than 3 percent of college students are English majors today. Liberal arts majors are waning, and, quite frankly, some see college as mere vocational training. I certainly don't.

Liberal arts is often misinterpreted as actually "liberal." That's wrong. The best definition is "non-vocational." So nursing, business, communications and obvious career-path jobs are not under the liberal-arts umbrella. The biggest misnomer of liberal arts is that it is only the humanities. That also is false.

Liberal arts encompasses the sciences, including physics, chemistry and biology, and the social sciences, including psychology, sociology and economics. To me, these fields can be more than applicable to the business world and tech world. I wholeheartedly agree with Deresiewiz, that our country would be better served with more diversity in education. 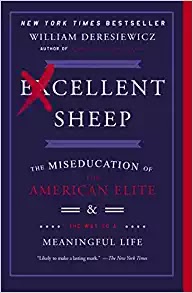 Unfortunately, what Deresiewicz saw at Yale is that so many college students don't truly get educated with a depth of knowledge or even the tools to understand and create knowledge. They bust their butts creating a transcript to get into an Ivy. They take accelerated courses, do impressive things in the name of admittance and feel as if they are owed for all they did to get into an Ivy. The education falls to the wayside; their appearance on campus is just a steppingstone to a job in the financial world.

I come from a perspective that believes diversity is a strength, but I worry for corporations and businesses that are only full of business majors. While I understand that certain occupations and corporations must look for business degrees, does it actually help these students to devote their undergraduate degrees to business, when there are so many important pursuits out there?

Especially at the Ivy League, where we have elite students, is that the best way for them to develop and explore their education?

College used to be a place of discovery, new ideas and, most important, education. Sadly, a lot of it has become about vocational training, and "silly" pursuits, like what it means to be human, economics and chemistry, is being left behind. Ugh, I for one, do not like the state of affairs reported in Excellent Sheep, but I appreciate Deresiewicz for reporting it.