The idea of neutrality does not exist 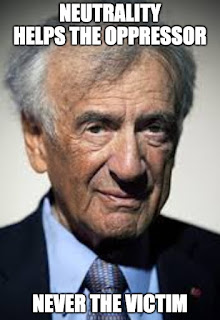 As anyone who has studied World War II knows, the numbers of those who died in the war and during the Holocaust are astronomically sickening. An estimated 70 to 85 million died when the world population was 2.3 billion. That's 3 percent of the world.

If World War II happened today with same percentage, we would lose 226 million of our 7.53 billion people.

In the Holocaust alone, we lost approximately 6 million Jews. The world looked on, complicit in this genocide, and it was a display of humanity at its worst.

But how do we really put this mass atrocity into words? How do we teach this to future generations?

Well, Night helps. I revisited the 1956 book last year and had my students read it. There are so many chilling scenes, and I believe Wiesel's decision to simply report various atrocities and not sensationalize or go overly emotional was the most effective way to show his first-hand experience of the Holocaust. 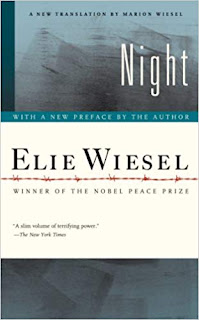 Earlier this year, a student and I got Holocaust survivor Gerda Seifer to visit our school and do a talk and Q & A. I realized that some students didn't totally understand the gravity of the Holocaust. That was shocking to me.

In the world of constant entertainment, "fake news" and students being bombarded with meaningless assignments and homework, the Holocaust can slip through the cracks to some. I had a strange encounter with a student who was explaining that he did indeed know a lot about the Holocaust because he got a perfect score on a test about World War II but then asking a year later, did not remember the details.

So, I guess the lesson is with the modern student who don't have a personal connection to the Holocaust is to teach and re-teach, to bring in speakers like Gerda, to read Night and remember that we first must examine the deficiencies of the human race in order to improve on those.

Night is a hugely known book and important to anyone's education. As Wiesel writes, "To forget the dead would be akin to killing them a second time."