We admit: Admissions are batty 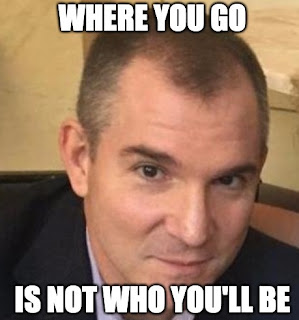 In the 21st century, the college admissions process officially has gone bonkers. Kids are stressed out. Adults tie importance, and even identity, into colleges, and then the price tag on many colleges is astronomical.

In a college-admissions world gone batty, it is hard to stay sane, and Frank Bruni's book Where You Go Is Not Who You'll Be (2015) makes sense of the culture.

In Bruni's book, he addresses fundamental questions and the admissions mania. One point that stood out to me was this: "All in all, the harder a school is to get into, the more worthy it is deemed. Why?"

So many myths bounce around about colleges that I just have to laugh. Are you really getting a better education at an Ivy League school than a state university? Or do you just envy the brand name of the Ivy?

Bruni interviews various successful people who did not go to majorly elite colleges. One interview that sticks in my mind was with famous author John Green, who went to Kenyon College, which I once visited when my friend Alex went there. In many ways, it was like the opposite of my Ohio State because it was so tiny and white. It only has 1,700 students, and today, it is 78 percent white, based on its website.

Green's story is that he tried to get into a writing class and was rejected, but the professor took the time to talk with him, explain the reasoning. Green was trying to sound smart and academic and did not sound authentic. That professor put him on the path to the writing superstar he is today. 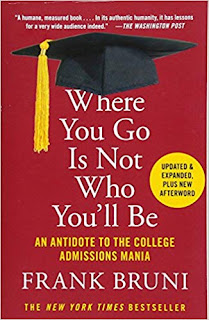 So a point about Kenyon is that it was so small that the professor was more prone to give Green individual attention. What I see that most elite students are looking for is status, status, status.

I've learned that the folks obsessed with the status of college brand names and car brand names are stuck in small thinking — especially when we're talking undergraduate degrees. Bruni's book is chockfull of excellent stories and tidbits, and another memorable scene had a mom who said this:

"It's like we're mass-producing robots posing as kids. ... They have no space to be kids. They're not feeling that the work they're doing is their own. They're succeeding, but it's not coming from within. And they're having a lot of psychological problems because of it: obsessive-compulsive disorder, freaking out because they're not perfect."

That quote came from a mom in New York City whose son was denied admittance into a prestigious preschool.

Email ThisBlogThis!Share to TwitterShare to FacebookShare to Pinterest
Labels: 100 nonfiction books I recommend, Joe Stevens writer/teacher, Where You Go Is Not Who You'll Be by Frank Bruni