Education is an exercise in freedom 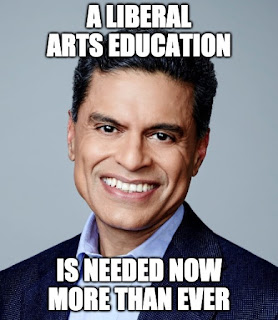 Not only is he a famous host on CNN, but he wrote an accessible and important book in 2015 called In Defense of a Liberal Education. Zakaria argues that our world needs students to follow a liberal-arts path now more than ever. I say, "Fareed, you are correct, sir. I couldn't agree with you more!"

Remember that, from yesterday's post about Excellent Sheep, liberal arts is often misinterpreted. It's not "liberal," and it's not just "arts." Some people mischaracterize liberal arts as painting or sculpture or something that has no market value in the "real world."

No, no, liberal arts encompasses a degree that is non-vocational. So while the humanities, literature and philosophy are a part of it, so are the sciences and social sciences. Yes, biology, chemistry and economics are all a part of it.

Zakaria has seen the same statistics as William Deresiewicz from Excellent Sheep. Liberal arts majors are majorly declining. Because the cost of college has gotten so high and student loans have gone bonkers, students feel as if they need a path out of debt ASAP and must major in business, nursing or something that is an obvious career path. I understand students' motivation. But is this the society we want? 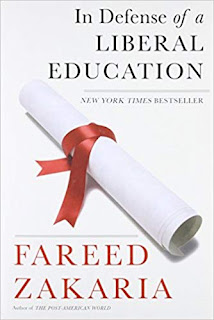 A better way to see the situation could be the following. In a technologically driven world, in which production and the work place are constantly changing, a liberal arts education is more important because it will develop the individual more and give him/her a stronger perspective than somebody else who majored in, say, business.

It is more important now than ever to pursue knowledge, to understand how to learn and re-learn, and a liberal arts degree likely will be more valuable in the 21st century workplace in the longterm.

In recent years, majors in English and history have vastly declined. Even President Obama once said that a technical training degree would be more valuable than one in art history. Obviously, our society has put a dollar amount on college degrees. Is that the right thing to do?

I say that education is so important that we should not put a dollar amount on it, but understand that to truly be educated is priceless. I'm not advocating overpaying for a college by any means.

No, no, it's the opposite. I fear that our society has lost its values. By charging so much for college educations, ironically, true education has been undervalued.

Email ThisBlogThis!Share to TwitterShare to FacebookShare to Pinterest
Labels: 100 nonfiction books I recommend, In Defense of a Liberal Education by Fareed Zakaria, Joe Stevens educator