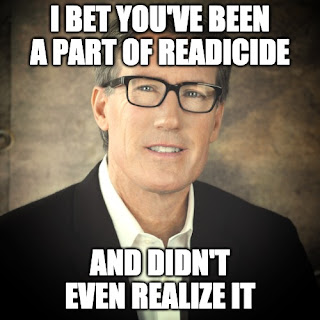 Readicide: the systematic killing of the love of reading, often exacerbated by the inane, mind-numbing practices found in schools.

That's how Kelly Gallagher defines the term in his 2009 book Readicide. Thank you, Mr. Gallagher, I could not agree with you more!

After understanding what readicide is, I realized that I was a part of it when I was in school, and I think we all were. I would be assigned outdated, inaccessible, so-called classics. I would listen to the teacher drone on about his thoughts, and I thought, "Books are boring."

I found a few worth reading around seventh grade, but I hardly read in high school. Reading didn't truly happen until grad school and even later when I fell in love with books because I finally realized what they were.

The so-called "classics" repeated year after year in school are not what books are. Books are a portal. They're diverse. They're fiction, nonfiction, sports, style, whatever. There are libraries full of them, and guess what? I, myself, am allowed to read whatever the heck I chose. 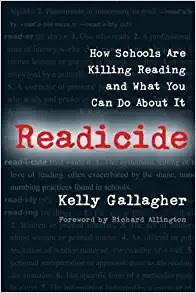 What Gallagher's book did for me was to confirm what I have long suspected, but he even has data to prove the importance of a love of reading and extended reading. In the schools, attention spans appear to get shorter each year. Kids read less and less. So what they do in schools is that they put readings on Google Chromebooks and have kids read things that take around 5-10 minutes. Say, what?

When I get students in high school, most of them have virtually no extended reading skills. In a class of 33 high-achieving honors kids, typically only four of them have read a book on their own that was not assigned in school. What is going on here?

Gallagher shows data to prove that extended reading helps close reading. A good metaphor he uses involves Olympic champion Michael Phelps. While Phelps cleaned up in sprint races to win gold medals, that doesn't mean he can't swim for distance well. It is foolish to believe students can do well with close reading, while they can't really handle a full-length book on their own.

Offering many tactics to engage reluctant readers, I say, "Just read anything." Read what you like. If you like the band BTS, read about it. If you like sports, read about it. It's time to end readicide and love literacy because it turns out that reading is one of the most beautiful and empathetic activities a human being can do.