We live in the Fantasy-Industrial Complex 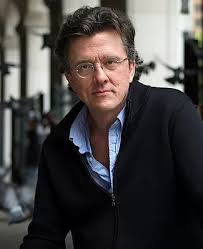 Editor's note: In the final category of 100 Nonfiction Books I Recommend, we have taken suggestions from friends and readers for books new to me. My friend Matt Gailey, a Cleveland native now in San Diego, recommended Fantasyland (2017) by Kurt Andersen.

If we truly examine it, Donald Trump's election makes perfect sense because the United States has been blending politics, news, infotainment, corporate money and madness for at least the past 40 years.

We are living in a world of constant corporate fantasies — or "Fantasyland," AKA the Fantasy-Industrial Complex as Kurt Andersen calls it.

Andersen walks us through our country's relationship with over-the-top fantasies from 1517 to current times. Some of the highlights include the Salem Witch Trials, P.T. Barnum, Mormonism and other religions created in the United States, Ronald Reagan and the X Files.

Fantasyland is a pop culture smorgasbord that repeatedly goes back to the thesis that the United States always has been a land of dreamers, hucksters, conmen and naive followers. The state of affairs today coupled with technology is in alignment with our history. 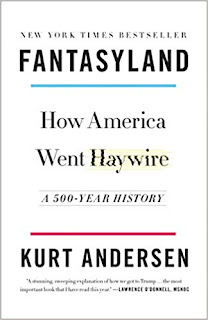 Once I soaked in Fantasyland, I saw my surroundings in a new light. When I'd see groups of kids on phones, I got it — part of the fantasy. When I looked at CNN and Fox News for comparison, I saw the fantasy — each's slanted narrative to lure viewers. When I was chatting with a friend during a hike and said, "We have more stories about TV than what we've actually done," we acknowledge Fantasyland. Then after the hike, I checked my fantasy football lineup.

So, yes, I concur with Andersen's thesis. But now what? Or better yet... so what?

Fantasyland did indeed make a much-needed point and had a zillion examples to support it, but where does that leave us? In the final pages, Andersen writes about the importance of making America reality-based again. OK, true, but what in detail does that entail?

To me, it goes back to previous books promoted in 100 Nonfiction Books I Recommend. Dark Money by Jane Mayer comes to mind as does Born on Third Base by Chuck Collins. Digging just slightly deeper, the reason we are in the Fantasy-Industrial Complex is that it makes corporate BANK.

Disney, the NFL, ESPN, WWE, CNN and any other entertainment entity that comes to mind is there because fantasies can be commodified on a mass scale in the 21st century. It's been that way for quite some time; some might argue it started with the printing press. Now, with all the tech and options, we find ourselves in the Fantasy-Industrial Complex.

So the fact that America is living in a fantasy world is less about the mindset of the individuals than the scope of media, but that is my view. Andersen takes more of a stance that it's on the individual, who needs to weed through the fakery and find the reality. OK. That's fine. But isn't the bigger issue that fantasies constantly are packaged as reality for corporate profit and that the lines of reality deliberately are blurred for bigger profits?

In the end, I recommend Fantasyland but with reservations. It's repetitive. It could go deeper and stray from its thesis to become the indictment of corporate infotainment that would be more on the mark in my eyes. In other words, it could focus more on the present and potential future than so much on the history.

I would have liked to see Andersen examine himself more. Finally, on page 433, as Fantasyland is about to end, he brings up his upbringing in Nebraska. His inner search lasted a whole three paragraphs before he went on to explain the logic of his agnosticism.

Ah. There it is. The hidden thesis! The Fantasy-Industrial Complex has created a world of constant phone users, screen time gone awry and a reality TV star as president. How has this happened?

Well, perhaps the main reason is it keeps individuals from searching inward and analyzing themselves. I believe this corporate fantasy world would go in a better direction if individuals looked inward, understood who they are and then understand what they are watching or consuming. But it's easier to look at a TV or iPhone than one's self.