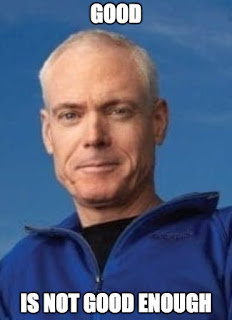 When a conversation about leadership books ensues, Good to Great by Jim Collins often pops up, and I had been hearing about it so much that I had to check it out. Solid. A page-turner. Yes, it is part of 100 Nonfiction Books I Recommend.

However, unlike the other books in this leadership category, I find it hard to remember. I think that's because there are A LOT of points in Good to Great, and it's not as simple, or specialized, as some of the other books.

First of all, organizations must be brutally honest with themselves. A company's bread and butter can change, especially now with rampant technology, so a company must understand its exact place in the marketplace. Easier said than done.

Steal. There always are better organizations out there, so when relevant, I say analyze what the competitions is doing and do it better. Simplicity also is critical. Companies need to follow three key questions: 1) What can I do best? 2) What makes money? 3) What ignites my passion?

Another key in the book is to stop doing anything that does not align to the company's mission. Prioritize. If leaders find themselves wasting time on irrelevant actions or tasks, that needs to end. Yes, that is obvious. But I see it happening all the time with seemingly well-intentioned leaders. 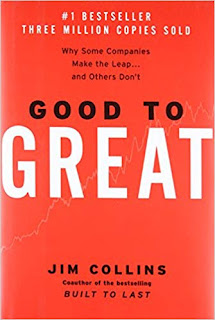 Some of what is in Good to Great (2001) applies to leadership anywhere, including public schools, but some doesn't. One glaring irony about leadership in traditional public schools is that because there is no pressing need for a profit, leadership can be harder.

In the 21st century, the marketplace drove innovation among companies, and schools typically have no incentive or wherewithal to improve. I believe public education has hope, but elements of it are like the health-care industry. We all know things in the system are not efficient, and sometimes cruel, but the system has become too big for easy fixes.

Another irony in public schools is that because the stakes are so low for the workers, that everything becomes a big deal. The pay is standard in schools based on time served, yet there are small things workers can do for a little extra — such as coaching and some specialized roles. But, financially, it's not significant. Ironically, all of this stuff becomes a big deal, even though logically and mathematically, it is insignificant.

Where the stakes are higher with for-profit companies is where organizations truly must understand Collins' book to improve. Companies that cannot be honest with themselves and cannot do something better than the competition are doomed.

Email ThisBlogThis!Share to TwitterShare to FacebookShare to Pinterest
Labels: 10 leadership books I recommend, Good to Great by Jim Collins, key questions for companies