The key to innovation: Positive deviants 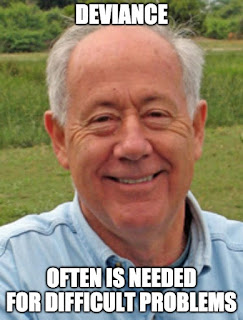 I've been deliberately giving my students difficult assignments and watching how they handle them. It's fascinating. Most go to Google within five minutes. Others go to others within that time, and many just give up immediately, turn something in and hope it's graded on "effort." But, uh, I watched, and for many, I saw no effort.

Every so often, I see actually talking, deliberating, collaboration. Some students do that well, but they only do it with friends they know and trust. They are focused on the problem itself, not the outcome, nor the grade, nor the perception of what they did. These kids are deviants!

In The Power of Positive Deviance by Richard Pascale, Jerry Sternin and Monique Sternin, we see how nearly all problems that societies or organizations face can be solved from within. It takes positive deviance to do this. When the culture of a society or organization is not working, or not thriving how it should, there typically are deviants who thrive no matter what. Just like there are actual problem solvers in schools, no matter what. A key to leadership is to figure out who those positive deviants are and harness what they got. A key to life is to be a positive deviant, when the culture doesn't match healthiness and improvement.

The Power of Positive Deviance (2010) defines what that is exactly and then examines seven examples in the world, including Vietnam, Egypt, Uganda and more, to see it in action. The problem, I see, in the United States is that there is so much static, division and diversion that many can't even agree what the central problems are. So true leaders make that judgement, even when outvoted, and move forward. 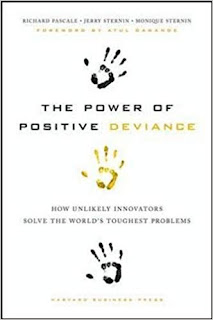 The odd thing about positive deviance is the word "deviance." The term "deviant" typically has a negative connotation. But the term is accurate because someone who does something outside of the culture is indeed a deviant. Many times, we assume that's a criminal act or that it's wrong. But often times, the positive deviants are the answer.

Why is it that under the same circumstances, some people thrive but others are miserable? What is the secret sauce? What is the difference?

Problems can be solved from within, and that applies to individuals and communities. What behaviors are critical, and what is sustainable?

It turns out that we live amid many, many success stories, and one key to leadership is to tap into those stories and have them spread. Those success stories typically are coming from positive deviants.