Is Twain down to earth or above us? 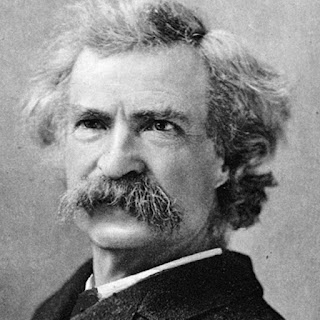 Editor's note: In the final category of 100 Nonfiction Books I Recommend, we have taken suggestions from friends and readers for books new to me. My friend Matt Kalinowski, a Portland resident and Southern California native, recommended Letters from the Earth (published in 1962 and written around 1909) by Mark Twain.

Mark Twain! I feel it's only fitting that this American icon makes the list. However, I must say that I had to "work through" Letters from the Earth. I skipped some parts and really am not sure I recommend the book.

Matt, I love you, man, but overall reading this was a chore. The easy part is that it was pretty short. Twain's diction may have been fitting for the time, but for me, it's just so wordy, verbose, roundabout, overdone. Eh, you get the point.

What I did like in Letters from the Earth is his theological critiques of Christianity. The problem is that I had some similar critiques when I was in elementary school. I believe questioning Christianity was practically taboo around the turn of the century, so perhaps Twain was innovative there. But where the book fits now, I'm not so sure.

It made me think of The God Delusion by Richard Dawkins, and then I was thinking that I much preferred that book. But it was written in the 21st century. 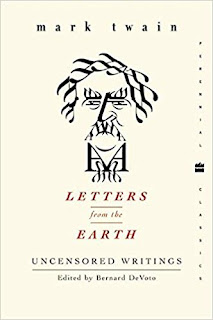 Another strength of the book to me is the candid nature of Twain's words. Mind you, this was published posthumously in 1962, and readers during his lifetime could have revolved against his Christianity critiques. But he doesn't hold back.

Letters from the Earth was written between 1904-1909, a rough time for Twain. He was deeply in debt and had lost his wife and a daughter during that stretch. His other daughter, Clara Clemens, objected to the publication of the book in 1939, but she recanted and changed her position in 1960. The book was published shortly before her death in 1962.

Twain was a lifelong searcher and questioner and, of course, had a way with words. Letters from the Earth might have been blasphemous during his time, but 57 years after its publication, I do respect it, and it's good to know that some of the inconsistencies of Christianity were discovered and explored in America well before I figured some out in the '80s.