Why do we stop questioning? 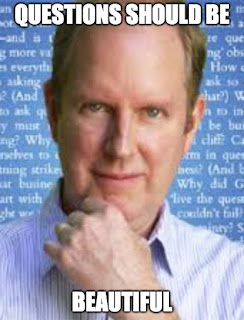 As a journalist, my job entailed asking questions, and I realized pretty quickly that the best questions were:

1) Actual questions. Ones I honestly didn't know the answer and had to ask.
2) Floaters. Oh, I knew the answer. But if I floated one up, the person being interviewed might just double down and hit it out of the park.
3) Under the skin. I knew very well that the interviewee doesn't want this one, but let's see what he/she does. Former L.A. Times columnist T.J. Simers was a master at this, and in soft-balling L.A., he was one of the only writers who went there. In New York, journalists toss out constant under-the-skin questions.

So I put in a lot of time into asking questions, the intricacies of questions, and I responded to Warren Berger's A More Beautiful Question. Innovation might be as simple as asking the right questions at the right time and to embrace "what if."

So many companies, leaders and individuals play it safe by doing the same ol' stuff. But in our constantly changing marketplace, playing it safe eventually will not be economically viable. That's why Big Tech has pretty much taken over the world. Tech had the technology, knew how to integrate it, and Google, Apple, Facebook, Amazon and more continue to get bigger and badder.

Philosophically, I absolutely love A More Beautiful Question (2014) because it's been my experience that folks stay on the non-questioning side more than the over-questioning side. When we talk about Tech companies, and the power of questions, well, that's tricky because a lot more is involved than mere questions. 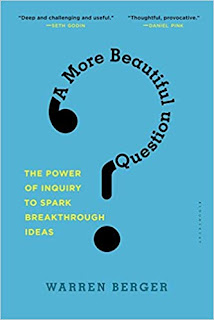 Berger points out that parents often don't ask open or inquisitive questions, so that contributes to killing curiosity and creativity within children. Adults need to be on a constant search for deeper understanding and innovation, and if they're not doing that, their children will follow suit.

It's amazing how so much innovation is occurring nowadays with the Internet as its backbone, and it's also amazing how so many things remain backwards because of the United States' mega-big economy. I've heard the phrase "too big to fail," but I say it might be "too big to work right."

I can think about the health-care system, colleges and loans, cars still using fossil fuels, for example, and wonder: Why are we still OK with this? If we're not OK, what will we do? Why aren't we constantly questioning practices that hurt ourselves or planet?

The first patent for rollers on suitcases came in 1972. The first commercial jet service happened in 1952. We had 20 years of people carrying suitcases. Where was the questioning? Say what?!?

I believe that we all have important questions inside of us, but unfortunately, our culture implicitly kills those questions. I must give Berger props for pointing out and exploring the power of beautiful questions.

Email ThisBlogThis!Share to TwitterShare to FacebookShare to Pinterest
Labels: 10 leadership books I recommend, A More Beautiful Question by Warren Berger, questions and leadership