Warren should appeal to Republicans 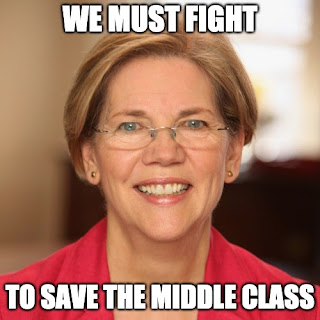 When I planned out 100 Nonfiction Books I Recommend this past summer, I knew that This Fight Is Our Fight by Elizabeth Warren would be on the list. However, I strive to keep this blog apolitical, and so I had minor reservations.

From a purely centrist American view, this book belongs on the list because it displays true leadership and promotes a vision of America that both Democrats and Republicans would agree, if they only took the time to be open-minded and read it.

Warren — and Bernie Sanders — are portrayed as "leftists" by both Democrats and Republicans on corporately owned networks and media. One reason they get that label is that they repeatedly attack corporations, and because the corporations have so much power, their factual assertions of a highjacked democracy by corporations must be "out there." Another reason they get that label is that political conventions call it "left" when there is talk of cutting down special interests in government and focusing on individuals.

But isn't the whole point of our democracy is that it is for the people? I would argue that our democracy has pretty much been off the rails since at least 1980. Isn't it each citizen's job to fight for democracy? Isn't it true that in many ways, our government plays second fiddle to corporate interests? 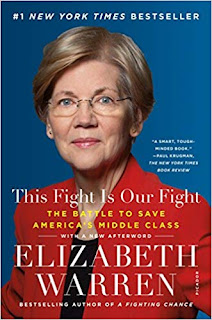 By the time we get to This Is Our Fight, we should realize that the system is broken — but not hopeless. The typically family needs two incomes, works its butts off and lives paycheck to paycheck. It is a major step backward from pre-1980 where there were more single-family wage earners than not, and those families had more savings, pensions and less debt.

I still believe in the American Dream, but what exactly is that? At last look, we had 607 billionaires in the United States out of 329 million people. So mathematically, it's ridiculous to believe you can be a billionaire. But, honestly, being a millionaire, with an M, should be possible for Americans who sacrifice, work hard, become educated and understand finance.

In her book and campaign, Warren repeatedly singles out the root of 21st century problems — wealth distribution. No doubt. We can trace wealth distribution and see that it negatively impacts the healthcare system, education, politics, opioid use and the lion's share of society's ills.

Sure, it would be great if Warren became the next president. But more important, we need all Americans, Democrats and Republicans, to stand up to the billionaire system of government and get a tax system that helps more than just the elite. And for God's sakes, let's hope we never elect another billionaire for any office and return to a government run by the people.

Email ThisBlogThis!Share to TwitterShare to FacebookShare to Pinterest
Labels: 10 leadership books I recommend, 2020 presidential race, Elizabeth Warren, This Fight Is Our Fight by Elizabeth Warren