Americans: Can they handle the truth? 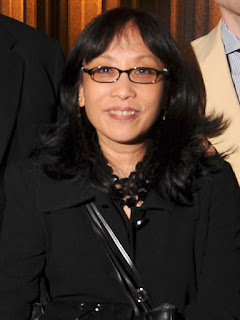 Editor's note: In the final category of 100 Nonfiction Books I Recommend, we have taken suggestions from friends and readers for books new to me. OK, how this recommendation happened is a little weird. Michiko Kakutani's name jokingly came up in a shoddy review about David Sedaris. I had been wanting to read The Death of Truth (2018), and my wife said, "Just read it then."

For anyone familiar with the name, I bet you have a similar reverence as I do. She was the longtime chief book critic of The New York Times and retired two years ago. Then, she wrote The Death of Truth, which examines truth in the Trump era in a scholarly yet accessible and captivating read.

At one point in the book, Kakutani conjectures how Trump's tweets could be printed and bound and become part of presidential history. That might very well happen, but I believe her book is more of an accurate portrayal of truth. Her book certainly is more truthful than the president's non-realistic and hyperbolic tweets.

The one thing about the Trump era that I cannot stand is the utter division seen in cable news, how people converse and animosity toward "the other side." No doubt, The Death of Truth is an indictment of Trump, but it is objective, fairly reported and takes us through the history of what got us here that is both accurate, fair and the truth. Furthermore, I reject the premise of our country's perceived division. There is no "other side" in my mind.

I found many aspects of Kakutani's book fascinating. Perhaps at the top of the list is how critical theory, stuff I studied in college from Derrida and Baudelaire, helped pave the way to the relativism of the Trump world. If we deconstruct a text so much to say that it has no objective truth, or that it's all subjective, then that path can take the idea of truth too far, to a place that is meaningless. 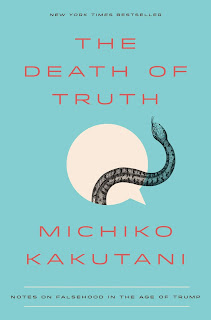 Trump and his strategy team have done what the postmodernist critical theorists did — to obscure and discount basic truth. But then Kakutani also looks at fascism and how Naziism rose, and it's eerily similar to Trump's rise. Mind you, this is not a knee-jerk liberal reaction. This is supported by legitimate texts and history. This is Michiko freaking Kakutani. How more legitimate of a source could there really be?

At one point, Kakutani calls Trump a symptom of the current political, economic and technological climate as well as an accelerator of it. Perhaps we all should have seen something like this coming, but I guess technology worked so fast that we wouldn't have realized the advent of fake news sites, fake posts, accounts on Facebook created by Russia and how Google's searches tailor themselves to the actual searcher based on his/her data.

In his 1985 book Amusing Ourselves to Death, Neil Postman (who I once briefly met in his Greenwich Village apartment around 1996) pointed out how the "electric plug" rendered our cultural discourse inconsequential. Our discourse would now be "simplistic, nonsubstantive, nonhistorical and noncontextual; that is to say, information packaged as entertainment."

This was back in '85, and it's in the epilogue of Kakutani's much-needed book. The electric plug, which Postman meant as TV, has become so strong that it put a reality TV star in the White House, and then he continues with the show daily. Practically all sources of information nowadays are entertainment based; I hardly see any depth to the typical American's daily discourse.

Maybe I'm a dreamer. Maybe I'm naive. I am hoping that soon the American collective conscientious realizes that truth is more important than power and that in the end, truth wins out. Of course, best case scenario, it may take years for the country to get back on a non-corporate, democracy path. Maybe we are too far gone at this point. But, heck, what is life, if we cannot dream?

Email ThisBlogThis!Share to TwitterShare to FacebookShare to Pinterest
Labels: 100 nonfiction books I recommend, Joe Stevens writer, The Death of Truth by Michiko Kakutani