Zen on the course 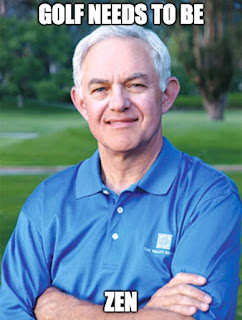 I used to be a basket case on the golf course, and sometimes I revert to that madness. I would overthink a zillion things, get in my own way and be my own biggest hazard on the course. Something had to give.

Finally, I took a different approach, to get out of my head, and Zen Golf by Joseph Parent helped a lot.

Golf can be a game of inches, a game of details and a game of thought. While golfers need to keep their head in the game in terms of course management, what types of shots to take and strategy, I find that the head often gets in the way of being loose, having fun and actually playing better.

I used to have a lot of ideas about golf truisms that turned out to not even be true. First off, nobody gives a shoot about your score. We care because we have been conditioned to think it matters, but does it? Nobody really cares.

Second off, I don't really care about my score. Of course, I want to improve and shave off strokes, and I brag about the one time I broke 80. But score is a manmade interpretation. It's much more important to play golf than golf score.

Some of my best rounds have had average scores. How do we judge a good round of golf?

I judge it by feeling good out there, enjoying it, not feeling any bit of pressure, not trying so darn hard and by stringing together some good shots. If the score is worse than my average, I no longer care as long as I felt it was worth the hours I was out there. 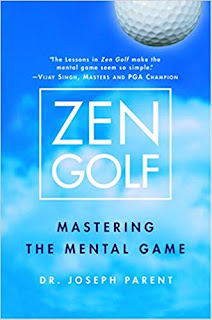 One of the chapters in Zen Golf is titled "How to Enjoy a Bad Round of Golf," and honestly, I wish all amateurs enjoyed their junky rounds, too. Sadly, because I see that most amateurs believe they're better than they actually are, they tend to not enjoy their rounds. They live in a delusion that their best round is their normal round.

Zen Golf (2002) opened the door to a slew of golf psychology books that I devoured. Anyone who plays the game realizes that negative thoughts creep in, and we must accept that on the golf course but let those come through and pass. Too often, we seize on the negative thoughts, make them bigger than just a notion, and then bad things happen.

Golfers also understand that we need total commitment to the shots we take. If we ever doubt a club selection or decision, those will come back to haunt us. And what exactly are we ever afraid of on the golf course? ... We're playing freakin' golf.

The adage of "golf does not build character; it reveals character" may be true. But I must give the game some credit for helping me develop grit, get my head on straighter, understand myself better and learn how to be more Zen.