The actual psychology of pitching 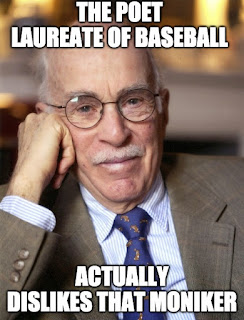 It had to start with Roger Angell.

As 100 Nonfiction Books I Recommend moves to the sports category, I feel that the longtime New Yorker writer deserves the accolades he receives. I was a sports writer at Newsday and the Long Beach Press-Telegram from 1996 to 2008, and I typically found sportswriting completely not literary, often cliche and to be gobbled or discarded.

The adage that "journalism is unreadable and literature is not read" comes to mind. As an idealistic sportswriter, I did my best to bridge that gap, and perhaps no one does this better than Angell.

It was not a huge book, but I am recommending A Pitcher's Story: Innings with David Cone (2002). Baseball is such an utterly psychological game that Angell's discussions with Cone delved into that better than any other book I know. Angell typically wrote essays, and the full-length book with Cone delivers.

I've been out of New York for two decades, but I was not surprised when I learned that Cone has been a color commentator in New York since he retired in 2001. He even came out with another book this year with Jack Curry. In a few games I covered at Yankee Stadium, Cone held court and was a journalist's dream when he was there 1995 to 2000. I remember him breaking down games in an intelligent, witty manner on days he didn't even pitch.

Angell followed Cone for the 2000 season, when Cone was 37. It probably was Cone's worst season, and he was in the twilight of his career. He had overcome an aneurysm and was back on the mound. All of this added up to insights, perspective and the wisdom from an accomplished pitcher. 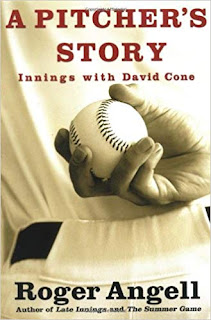 My lord, so much has been written on baseball, and so many movies are out there. Bull Durham, The Natural, Field of Dreams, Major League — OK, look, I can go on forever, and I find baseball to be the most American of pastimes. It might be even more American than online shopping!

Sports can be crazily extreme. We can go from the worst possible loss to the best win and back to the worst loss in a matter of moments. A Pitcher's Story starts with Cone's perfect game in June 1999, only to follow him struggling ridiculously the next season. That was only the 16th perfect game in major-league history.

The book explores Cone's upbringing in Kansas City, where his dad was a night-shift mechanic. The parents scraped together enough money to send Cone to a Jesuit high school, and I can relate to that because I, too, attended a Jesuit high school — St. Ignatius in Cleveland.

But the thing that is so superb about A Pitcher's Story is that neither Angell, nor Cone, fall into baseball cliches. They tell the gospel truth of how it actually is to go through glory and defeat and aging in the sport, and life.

Of course, baseball can be life. It can be painful, unfair, quirky, change by chance. It can be jubilant, gut-wrenching, gleeful. It is quite rare, practically impossible, for it ever to be perfect.