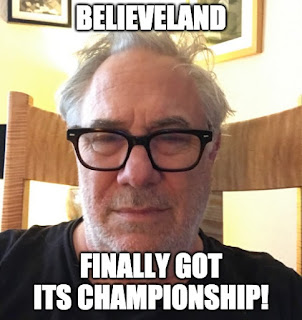 This stuff runs personal, and to me, all good stories go personal — crazy personal. So out of the myriad books on Cleveland sports, I recommend The Whore of Akron: One Man's Search for the Soul of LeBron James (2011) by Scott Raab as hitting at our city's collective feelings more than any other book.

Shoot, man, Cleveland is America. I feel in my bones that there isn't a more American city than Cleveland and maybe no American state than Ohio. Y'know, the presidential election has gone with whom Ohio has picked every time but once (JFK) since 1944. Talk about political diversity!

Cleveland's economy has been through the ringer and back. We were a huge steel town, only to see that industry die, and then we slowly pieced together a livable city and economy.

Through it all, our sports teams have been our salvation. The teams are pastimes that unite our city and bring us together. No need to go through our painful sports history, so go ahead and watch Believeland from ESPN if you either got the urge to relive it or know it.

So The Whore of Akron was written at a low point in Cleveland sports lore, when LeBron James announced that he would take his talents to South Beach. What?!? Our city was up in arms, and we were burning LeBron jerseys in effigy. 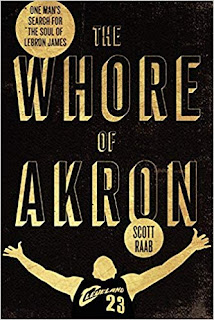 Venomous, crude, unforgiving and honest — that's the best way I can describe the book. Even with the knowledge of LeBron returning and miraculously bestowing Cleveland's first championship to the city since 1964, I still recommend the book.

Did we forgive LeBron? Why, yes we did. Did he have to come back to the city and get us a championship? Yes. ... Deal. LeBron, you are now the champion of Cleveland or the basketball Jesus of Cleveland. But you used to be, for lack of a better word, a whore.

What a story! Any sportswriter worth his salt understands that the better story typically comes in the losing team's locker room. Had LeBron not left to stupid-ass Miami, Cleveland would not have the extra layer of its championship story. Honestly, looking back on what happened, our story could happen no other way.

Of course, the Cavs would have to knock off the team with the most regular-season wins in NBA history with Golden State going 73-9 that year. Of course, we would have to come back from a 3-1 deficit and win the championship on Golden State's home court.

Yeah, it's Cleveland, baby. It's the only city I know where a whore can become king.