'Getting there' takes mentors — and capital 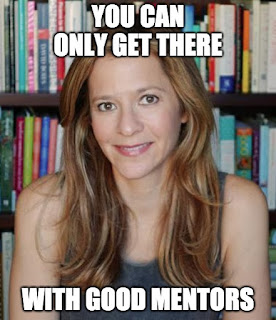 I have learned that the idea of the "self-made man" or "self-made millionaire" is a myth. The United States perpetuates this mythology that champions the individual, but we need so much help and rearing along the way, that it's safe to point out this is indeed a myth.

So I responded well to Gillian Zoe Segal's Getting There: A Book of Mentors because the idea of mentors is huge with growth. Segal interviews 30 powerful people from various industries, and I found many insights in the book. The most memorable interviews (and I did read this book about three or four years ago) were from Warren Buffett, Sara Blakely and Anderson Cooper, although practically every interview had something useful.

I've had a couple full-fledged mentors, but most of those came when I was a student. In the workplace, I quickly learned that mentors really didn't happen. At least, that was my experience. I had some "people in my corner," and that meant something. However, I feel that I've done most of my key learning on my own and fight to be further educated and grow.

If only ... one of the 30 power brokers in Getting There became my mentor or influencer, that would be nice. It certainly wouldn't hurt if Frank Gehry or Jeff Koons or Michael Bloomberg took me under his wing. Is it ever too late to try to be an architect or artist or try to defeat Big Gulps? 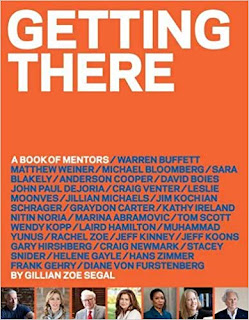 One thing that helped me was Buffett's point to pursue something you love in your "circle of competence." That resonated me. At the time, I was pursuing a potential career in school administration. I even got the credential to do that, and I want to keep that door open.

However, when I eventually got teamed up with other potential administrators, I discovered that they could do the job, too. I realized that I probably would be no "messiah principal," and that idea is a myth, too, because systems trump individuals. I got on a path to read more and write books. I have put in well more than 10,000 hours into both reading and writing. Writing books indeed is in my "circle of competence."

Segal herself mentions Buffett's points as one of her top takeaways in this interview with Forbes. A funny thing in that interview is that she says she had no mentor, and that's why she created this book. True. It's hard to find good mentors because most don't realize that it is a two-way street. The mentor benefits from the relationship as well.

The interview with Blakely, the billionaire founder of Spanx, stood out to me, too, because I found her to be genuine. The idea of Spanx spawned because nothing like it existed in the marketplace, and she faced constant obstacles and rejections until she fought to make the company what it is today.

However, Blakely's main personal narrative is how she struggled, sold fax machines for a while and created and trademarked Spanx. Eventually, the product got into every main department store, and Oprah even featured it. Man, she was off and running, and others did indeed help her get there. I just find it disingenuous when billionaires talk about struggle. I'd like to see them grow up in some of the neighborhoods I've been.

If I read Getting There today, based on my newer understanding of wealth distribution and billionaires, I might have a different reaction. Why are Americans so fascinated with billionaires, these capitalistic wizards?

I notice that there recently is some sort of Bill Gates propaganda show on Netflix now, and Oprah has ruled her empire for decades. I believe these billionaires need to focus on others and wealth distribution, not constantly growing their net worth and promoting their narratives. But Americans are so out of it, they'll probably believe anything they see or hear. They elected a billionaire to the presidency and probably will do so again.

Email ThisBlogThis!Share to TwitterShare to FacebookShare to Pinterest
Labels: 100 nonfiction books I recommend, Getting There by Gillian Zoe Segal, Joe Stevens writer