Literary icon at the baseline 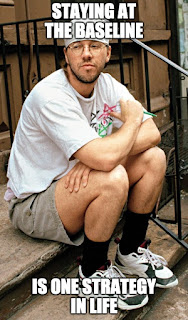 It might be a little sneaky for me to get David Foster Wallace into the project 100 Nonfiction Books I Recommend. The literary icon is known more for his fiction and Infinite Jest. But his essays on tennis belong on this list because String Theory is indeed the best book I've ever read on tennis.

Wallace died at 46 from suicide in 2008, and String Theory was published in 2016. There are only five essays in the collection, and so it's a bit short yet worthwhile, insightful and meaningful. He was a relatively successful junior player in Illinois, and in his first essay, he writes about how he sees the angles and geometry of tennis.

A lot of his writing is OCD on display and from a mind that speeds fast. Some have labeled Wallace "a genius." Maybe. But to me, the real geniuses are the ones who can balance life and art and have their minds actually work for them. I'm not sure he had that part of the genius equation. However, I am naive when it comes to mental illness, and perhaps the point I'm making is simply it's a shame we lost David Foster Wallace.

Because he was a tennis player, he boasts a ridiculous abundance of knowledge on the game, and I find it impossible to not want to go hit some balls after reading String Theory. Of the five essays, I found the one on obscure player Michael Joyce as the most meaningful. 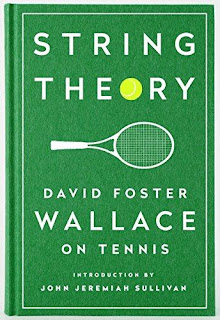 I'm a casual tennis fan, and I know that Roger Federer, Rafael Nadal and Novak Djokovic have dominated the men's game for more than a decade. But what about everybody else?

Wallace follows Joyce at the Canadian Open in 1995, and for me, as a former sportswriter, I loved that Wallace went to the side courts to focus on a player in the margins to analyze and report on what was happening there. I learned real fast as a newspaper journalist, covering pro sports and the NBA for god's sakes, that I had to find killer stories within the context of what the readers and editors wanted.

Wallace already was on the path to literary icon when the story on Joyce dropped in Esquire. It looks like he had carte blanche with his story on Joyce, so we can see what it's like to be the 79th ranked player in the world.

Think of how elite that is — 79th in the freaking world! But a player like that typically lives a life of obscurity, qualifiers to get into tournaments and dedication and practice that is out of this world. In the world of sports journalism, we often focus on the last-second shot, the superstars, the glamour.

It turns out for most of anyone pursuing sports, it's not nearly as glamorous as the fans think. Wallace's story on Joyce offers truth that we don't often notice, and those types of truths can be mighty powerful.